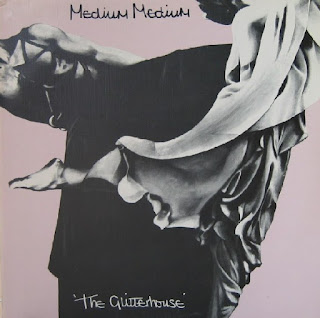 Nottingham's contribution to the post-punk funk party, was Medium Medium, last seen on the "Hicks from the Sticks" compilation.
I'd like to say that they were the thinking person's "ABC", but ABC, were the thinking person's ABC.
The best equivalent I could dream up was that they were a moodier, less naff Duran Duran, but without the shit clothes, and lacking  Le Bon's subhuman poetry....(I've still yet to hear any lyrics to beat "You're just about as easy as a nuclear war" for shear pretentious incompetence).
Compared to Duran Duran, Medium Medium (notice the similar group name style?), were Stockhausen.
Around this time there was a fine line between chart friendly naffness and cult status.One minute you're as cool,and as skint, as A Certain Ratio, the next you've turned into Modern Romance and rightly contemplating suicide.
I have a sneaking suspicion that Medium Medium wanted to be Modern Romance,or at least the thinking person's Duran Duran.

DOWNLOAD in hunger not anger HERE!
Posted by Jonny Zchivago at 13:28

A far better funk/punk outfit was the follow up to the Mediums...C Cat Trance...just as The Box outshone Clock DVA once they abandoned their funk roots.

Not a great fan of the Mediums, and was never privileged to have bothered to listen to C Cat trance, so I checked them out on YouTube, and apart from the annoying Ethnic stealing bits, I quite enjoyed the experience.
Hey konrad, I got into trouble on Jayne Casey's (Big In Japan etc) Facebook page by arguing that the Nazi's were left wing.....Charles Shaar-Murray was suitably miffed that i would say such a thing.....so thanks for that.
Having said that Jayne gave me a 'Like', so it didn't work that well.

Hey, what the hell are friends for if not to get you into trouble at the pub!!!! :D

Oh, and Jayne's work with Ambrose and the assorted Pinks was her finest...what's she doing these days?

Indeed, loved that Pink Industry LP 'Low Technology'.....i think she made a bit of money from that 'Cream' nightclub in Liverpool,which went europe-wide. Now she's involved in various arts projects,and seems to be readily available for any TV interviews about the olden days.She was 60 a few weeks ago.

Pink Military, Pink Industry...all of it was brilliant, and Ambrose Bierce's solo lp was awesome as well. 60 eh...god I feel old now...just turned 59 last month myself.

Hey, I have a rip of the Pink Military LP and all their early singles, all nicely cleaned by a gent I had the good fortune to find many moons ago...you want?

I do have a rip of that, but i'm not sure of the quality,it was done about ten years ago,so it will be crap......what i'm trying to say is, yes please if you have the time.
I'm just a spring chicken by the way,a very youthful 53.

Done, just reripped it, but misplaced the track listing for it and will need to go through the tracks and identify the album and various single tracks. One caveat though...you'll get them in full quality flac format (or at least as full quality as 16bit cd offers)...if you post, post in that same quality...deal? :)

Wasn't thinking of posting any Pink Miitary, but you never know. But if i do,and i remember, i'll honour your wishes.I'll ID the tracks if you don't.
I suppose the album title would give me an opportunity for a rant against humanity and religion, so maybe i'll get something together.I've got at least one peel session i think.....mmmm interest sparked.

Couple things...Bierce above should be Reynolds. I can only plead old-timers for mixing up the names of a great American author and a Brit post-punk artist. :)

2nd, got the Pink Military all ripped and correctly sorted...is there an email I should send the links to, or do you just want me to post them here for all and sundry?

Forgiven, I never even noticed the faux pas!

Probably direct to me maybe the best option,then it will have its time in the spotlight rather than hidden in the comments section where few fear to tread.
I may do a 'Pink' theme for a week, so i can do the pink's...Military, industry, Section.....er...i'm sure there's more.....not Floyd however.

And may I ever be "THAT" mate, who gets you into trouble at the pub. :D

I have this LP. And the reissue CD.

One thing that's missing from the collection presented here is the original mix of "Hungry, So Angry." The one here is the Adrian Sherwood remix. CD reissue on Trance Records has both.

The U.S. version of "The Glitterhouse" had the Sherwood remix and not the original, so that's the familiar one to most people.