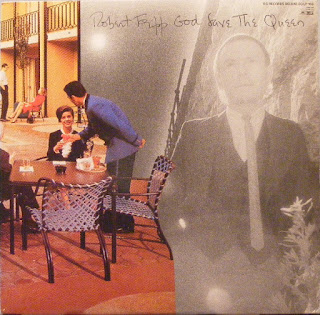 The more experimental follow up to "Exposure" was this Frippertronics heavy tribute to 'Our' Queen, with much of the work being performed by improvisation.
On the Under Heavy Manners side of the album, the effect was modified in what Fripp described as "Discotronics", adding a solid drum beat, a bit like those 'Hooked On Classics' records, and a funky bass line to create a dancier sound.Obviously influenced by that Mutant Disco stuff from the clubs of New York,where he was living at the time.David Byrne guests on urban ethnic vocals,straight from the 'Mudd Club'.
"God Save the Queen" itself bears little resemblance to the British national anthem, although it is based on the opening notes of that tune. It was inspired by a comment from an audience member at a Frippertronics gig, who suggested that, as the performance was taking place on the tenth anniversary of the Woodstock Festival in August 1979, Fripp should reprise Jimi Hendrix's performance of "The Star Spangled Banner".I would love this to be the new anti-anthem for the English at the commonwealth games and other such events; completely lacking in Jingoism and rousing knuckleheadedness. It more than adequately portrays my own personal emotional connection to my motherland, which i have recently fell out of love with.Don't worry it's just a lovers tiff,i'm sure it'll all work out in the end when all the bigoted loony tunes go back into their bunkers after this new wave of populist politics reveals itself to be a disaster.

In the meantime we can listen to the stuff that made that sceptered Isle full of noises the culturally great place we all knew, instead of a book burning hinterland land for dumb bigots.....excuse me for a moment while I snarl....WANKERS!.....better out than in i suppose....that's anger not a reference to the EU, if there's any thick Brexshitters reading this?....which I very much doubt.Don't think yer average bigot has even heard of 'Art' never mind Fripp, or even left the country beyond the Costa del Scunthorpe. Soon, if Fripp and Eno want to go and play another gig in Paris, they'll need a visa and a work permit.Ah, the Freedom of it all?

DOWNLOAD and save yourself from missing out on more Fripp HERE!
Posted by Jonny Zchivago at 13:22

I remember side two making me very uncomfortable with the prospect of RF moving towards new wave/disco hell. Thankfully his next step was The League of Gentlemen which was not as agonizing as I was expecting. I wish he'd let KC go. It gets less interesting with each incarnation.