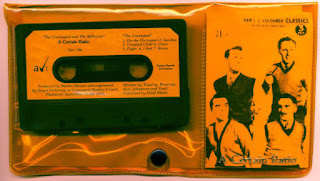 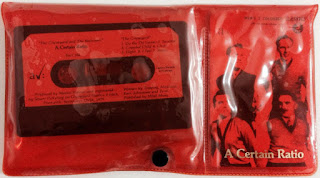 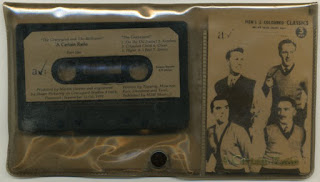 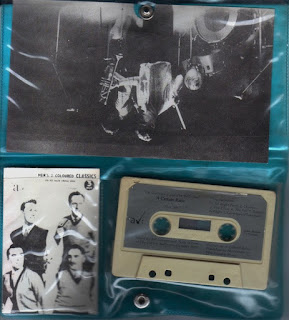 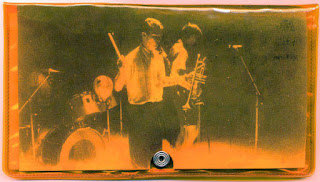 One of the earliest of the post-punk crowd to introduce the 'Funk'into the 'Punk', was Manchester's shorts wearing doom funk merchants, A Certain Ratio.
Factory undoubtedly flirted with Fascist chic,both in their artwork and the group names.There are obvious examples,but here we're looking at 'A Certain Ratio'. Their name came from a speech by Hitler referring to the ratio of Jewish blood someone needed to have before they were considered as being a Jew.This was later explained away as coming from Eno's song "The True Wheel".....if correct, maybe they should have done a bit more research before using it.....but then again why not? These days all one has to do is mention anything 'Third Reich'-y, and the finger pointers are out labelling one a Nazi.Which is a major violation of the old adage, "Forget the past and you're doomed to repeat it".
A bit like pop music and art I suppose.
Back when Cassettes were futuristic in conception,this cassette only release,hit the streets in February 1980,and came in plastic pouches of various colours and designs.Not very Nazi-chic,until you see the photo of four sharp young men clad in various tank tops,cardigans,with the odd moustache,then think that this wouldn't have looked out of place on the cover of a Laibach album in the 90's.
"The Graveyard and the Ballroom" contains 14 tracks: 7 demo songs from a session recorded at Graveyard Studios in September 1979 (side A) and 7 songs from a gig at the Electric Ballroom in October 1979 (side B), together with Joy Division* and The Distractions.
This album captures ACR at their best, still raw (as in BH...before Hannett),Dark and not too funky.

[*NB....Just so happens that I have a bootleg of the Joy Division set from that night as well.....which you can download by clicking HERE!]

DOWNLOAD from beyond the graveyard HERE!
Posted by Jonny Zchivago at 13:58

My favourite blog, a milion thanks. PS were you in Leicester in the early to mid 80s? I was at the University, just checking.

Yeah, I was born and inbred in Leicester,so I was there all the way through the eighties in fact.Went to a few gigs at the University, mainly late eighties,went to see a weird mixture of stuff,Napalm Death,The Live Stiffs tour,Lush, They Might Be Giants,The bloody Lilac Time with Stephen Tin Tin Duffy.....you could get Special Brew on draught there.

I prefer the "The True Wheel" explanation...

Glad I stumbled on to you. And "doom funk" made me laugh. Good stuff.

One correction: Hannett produced the Graveyard sessions, so those aren't BH recordings. Tony Wilson mixed the live set, though. Great stuff all around.