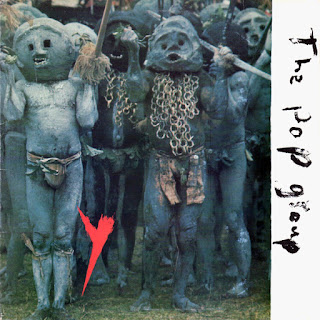 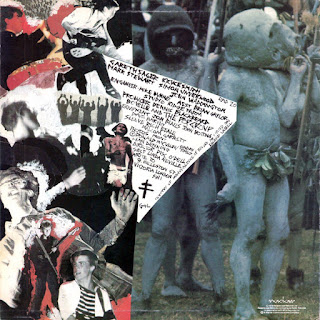 To wrap up this brief sojourn into the seedy underbelly of post-punk Bristol, we end logically at the beginning, with The Pop Group's rather marvelous "Y" album.
Along with PiL's first two albums and anything by This Heat, this magical record loomed large in my teenage years. Everyone who reads this blog must be familiar with it(surely?),but it can't hurt by posting it again!?
I hardly noticed the overbearing politics when i was a yoof, but without doubt they must have crept in by osmosis, because I'm the same kind of pain in the arse as Mark Stewart is.......but at least i recognise it and occasionally shut the fuck up!......i do describe my self as a Nihilist these days though,which is a nice cop out for me.
There are so many classic tunes on here, but what i like the best about it is they never thought twice about mangling them up completely, with the help of Brit-Dub producer Dennis 'Blackbeard' Bovell .
"We Are Time" has that classic, 'surely it had been written before' vibe that all classic tunes have.....could have been a hit if Echo and The Bunnymen had released it in its straight form; but with admirable,and fashionable for 1979, anti-commerciality, they walked the walk and rendered it unsellable.Nearly perfect in it's imperfection.....Y?.....because i say so!

She Is Beyond Good and Evil

Thief Of Fire
Snowgirl
Blood Money
Savage Sea
We Are Time
Words Disobey Me
Don't Call Me Pain
The Boys From Brazil
Don't Sell Your Dreams
3:38

DOWNLOAD Y and all the other letters of the post-punk alphabet HERE!
Posted by Jonny Zchivago at 09:05

Effing brilliant! Not everyone's cuppa, but I love it!

The first PG I knew about was For How Much Longer... in '81. The only other one I could find was the We Are Time official bootleg. In around 1985 I came across a used copy of this one. A record store twerp had written "unlistenable" on the price sticker, like anyone would give a damn about their opinion. I found Y a bit more subdued than FHMLDWTMM actually, but I was happy to have stumbled upon it. Another stellar choice Jonny, thx.

They copied us. Aesthetically. 35 years before we did it. You just shit in my handbag and told security I was shoplifting... I.O.U.1.