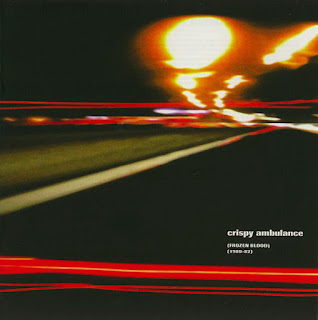 To round up our short ride in a crispy ambulance,here's the obligatory Singles,and sessions compilation from the Ambulance's best years before they broke up for the first time. Allegedly, they are together again and touring.(Wasn't there a Half Man Half biscuit tune where the line 'You're Going Home In A Crispy Ambulance' was chanted in a football terrace chant stylee?)
This includes a high fidelity version of their Peel session from january 1981, which you should already have downloaded on the "Blue and Yellow Of the Yacht Club" cassette.
Also we have the first three singles on Factory, and some live stuff to fill it up with.
Do 'they' call this stuff 'Cold Wave' these days? I dunno, but the term seems to safely describe the Isolation one feels when listening to this band; not helped by the fact that not many of your mates thought that they were any good .A myth spread by the music media of the early eighties.Like a fine wine this music has matured nicely into a full bodied frozen blood Manchester red, thawed out from the vintage years of 1980-82.

DOWNLOAD cryogenically from a crispy morgue HERE!
Posted by Jonny Zchivago at 23:54

Thank you! This band rules!!!

My thanks also for the rare CA...

Next thing I know, you'll be posting Royal Family and the Poor stuff. :)

Can't explain to myself why they have eluded me then. I hear some Medium Medium on some tracks. Thank you very much!

Perhaps the press torpedoed the band as you note Jonny. However this Yank's dubious observation that regardless of the music quality the band was destined to be derided due to the silliness of their name if for nothing else. Am I going to tell my friends I'm into something called Crispy Ambulance? No fucking way. Same for Kitchens of Distinction, Prefab Sprout and a hundred others. Sling your arrows for my American shallowness if you like. The band name is stupid and it wouldn't matter if they were all gods that made the greatest post punk music known to man. Their moniker makes them toast.


The classic line from Half Man Half Biscuit's Running Order Squabble Fest is in fact:
'You’re going on after Crispy Ambulance'.

So thats it is it?....I think I prefer my version...would look good on a T-Shirt anyway.

lifelong american here...one o the best names ever!!! ever says i