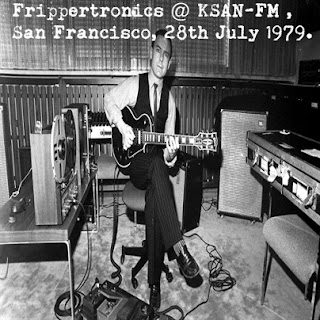 As a Frippertronics recording you can't get much better. This came from a visit Fripp made to KSAN FM radio in 'Frisco,the day after his Tower Records appearance in Hollywood, and recorded these four tracks for the Phil Charles Show later in the night.
The context for these performances is slightly different, as they were intended for broadcast, probably only once, and not part of a live performance with an audience. He often spoke of the 'Vampiric' relationship between audience and performer.Something which is altered drastically on record and on radio.These tracks fall somewhere between live and studio,and musically are some of the best recorded versions of Frippertronics I've heard.It's just missing Roberts between track banter.

DOWNLOAD fripp in the home of hippie HERE!
Posted by Jonny Zchivago at 10:06

We had the whole set once apon a time, but here are some excerpts:

Many thanks for this.
-Brian

Dabbling with Hall & Oates aside, Mr. Fripp is someone I want to like more than I do but it's due to his personality not his music. His inter-galactic sized pomposity is a massive barrier for me. Not that he or anyone here cares or should care what my barriers are. Just sayin', as is commonly said in the States. So I'll enjoy this offering with gratitude Mr. Zchivago. I'll simply send the Interview track to trash.

You know what? I like his pomposity, mainly because I don't think it's totally genuine. Its mainly a stage persona to distance himself from the bloated and ugly world of 'Rock' music, with which he was previously associated. I find him hilariously funny.If I was ever taken seriously as a musician,i reckon i would dress and act in a similar fashion......mainly for a laugh as much as any anti-rock stance. A Great and unique guitarist.

Fripperies galore. Thing is Eno introduced Fripp to the tape delay (himself having borrowed it off Riley) and after Pussyfooting about Fripp works out how to switch the gear on and that he doesn't need Brian who in any case doesn't much like touring anyway. So off he goes pedaling but it always sounds the bloody same, yes he has that sweet sweet tone but within a second or two you know just how the track will sound. As for Dax yes she used to lead Fripp on getting him all hot under teh collar, but Karl was always in the shadows. In the end Fripp realised he was on to a loser and gets off with Toyah instead, talk about scnd best. Still happy Mr & Mrs. Bill Z

@Jonny Zchivago:
Mmmmm, I'm not convinced his pomposity is a put-on. Your argument for it is plausible enough though, and I'll hoist you a pint for that. And for all the great posts too, as always.