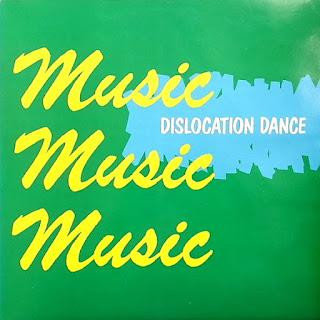 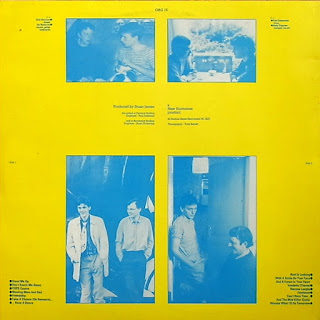 The title of this LP by Mancunian Indie-Jazz combo, Dislocation Dance, should really have been 'Muzak Muzak Muzak' and played in shopping malls everywhere,the BBC2 afternoon test-card, with the odd daytime TV theme tune thrown in.Very pleasant it is too, in a Herb Alpert and his Tijuana Brass meets Belle and Sebastian kind of way.
It comes from around the time that groups like Weekend, and Everything but the Girl were polluting the proto-indie stream with their Jazzy Pop blandness.This at least has something spookily strange about its post-punk easy listening vibe, and if it was less 'cool' would have not been out of place being spun in the chill-out rooms of clubbing culture in the nineties.If this was by the Harvey Averne Dozen I would have bought it for the second time around in 1995.
A weird fact is that is was released on the label that kick started the DIY boom, the Buzzcocks' New Hormones, and features Andy Diagram of the wonderful Diagram Brothers, moonighting, on the Trumpet.
They were in fact a lot less polished than this,and a tad more Post-Punky and funky when they appeared on the classic UK DIY Manchester Musicians Collective compilation "Four Ways Out" only the year previously.How fast things moved in them thar days?

A1 Stand Me Up
A2 Don't Knock Me Down
A3 YOPS Course
A4 Meeting Mum And Dad
A5 Friendship
A6 Take A Chance (On Romance)...
A7 ...Have A Chance
B1 Roof Is Leaking
B2 With A Smile On Your Face And A Frown In Your Heart
B3 Vendetta (Theme)
B4 Narrow Laughs
B5 Footloose
B6 Can't Race Time... And The Mad Killer (Coda)
B7 Wonder What I'll Do Tomorrow

My first exposure to DD was “Rosemary” (on an NYC radio show around the time it was released) and over the years I've collected much of their catalog looking for another gem like that. Rosemary still remains a standout to me.

Thanks for this and all the recent truly excellent post.