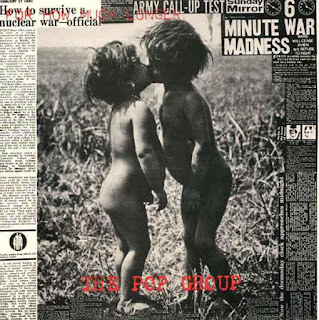 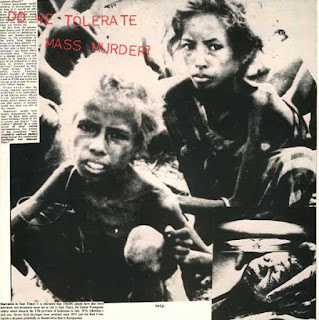 The Pop Group's 'disappointing' second album,is in fact really good; despite some rather chaffing in-yer-face politics.
Snappy album title that, I wonder what these chaps' message to all us unenlightened worker ants is?
The Cover photo is a tactic used today by Charities,whose directors draw huge salaries, on those TV adverts voiced by millionaire actors who urge us to donate £3 a month with a background of sad piano music to manipulate our emotions.Except in this case the background music is designed to turn us into angry militants.......albeit dancing angry militants.
Its kind of patronising, and insulting.......but then again some of us need to be patronised and insulted, so fair enough.
Preaching self-righteousness aside, the music is ferocious punk-funk-dub, spat out with all the venom of a napalm attack on a village of vietnamese children.
The answer to the question?
We will continue to tolerate mass murder, because that's what the human race has always done.One day we will all realise,in all our arrogance, that we are not the chosen ones,but are merely on the top of a food chain and will do anything that maintains that position, including killing the opposition .If that means destroying ourselves then that is what we will do, clearing the way for a more successful species that can manage itself better than Homo-sapiens obviously are incapable of doing.

1.Forces Of Oppression
2.Feed The Hungry
3.One Out Of Many

4.We Are All Prostitutes
5.Blind Faith
6.How Much Longer
7.Justice
8.There Are No Spectators
9.Communicate
10.Rob A Bank

DOWNLOAD and tolerate the pop group HERE!
Posted by Jonny Zchivago at 12:38

This is the record they're known for, in my limited distant view anyway. I HATE the kind on manipulative ad you reference and turn the fuckers off all the time. I always took the two children as kissing each other goodbye, pretty much all there was left to do considering how things looked then. Perhaps they still are. Ferocious, that the word I was looking for the other week when I was trying to explain to anon why the current band is so feeble in comparison. Good rant mate, but I'm only a member of the choir.

Yeah, there's been an advert where little Azumi has been dying for about ten years.Looking into my cold heart with those baleful.pleading eyes.All this with Richard Clayderman tinkling the ivories in the background.Even if i donated £3 a month, those eyes would still be accusing me of not doing enough,so do I pay again?......donating £3 to the massive salaries of charity directors and government officials in whatever corrupt war strewn african republic that little Azumi lives in?...of course I naturally want to save Little Azumi,but I don't trust these bastards.Its not in their interest to do anything worthwhile or they'd be out of a job for starters.

In the US they run ads like this for exploited kittens and puppies as well! It's pretty damn brutal. My wife is particularly allergic to those

As for the exploited humans, the thing is, more often than not those poor souls are in their plight due to the actions of men much wealthier than you or I will ever be by a factor of a million. For me at least, these facts make music like this so vital all these years later. it also makes the switch to the current PG so disheartening. My response to these realities is not to fucking dance.

Eat The Rich still rings true to my ears. If I had my way in this wicked world, I'd hold an international barbecue consisting of the the slow roasted 1%. World hunger would be eased immediately. The rate of exploitation would be greatly reduced as well. Then again, the one percent might make better fertilizer...

Really thank you for this blog, it's amazing, I can't stop download, every page is a gold mine !! Some things I was searching (a lot), some things I discover, I'm like a child in a toy's store. Of course, download as a warthog is stupid but it's often about bands or albums I searched in vain (in mp3 format). I am 53 years old (...) and from this vinyls and cassettes generation (without nostalgia but still a little bit) and very affected by industrial music, punk, post-punk, minimal synth wave, experimental stuffs, etc... So, thank you again. I posted this comment

I was searching the first album from Missing Foundation (s/t) and some Tackhead's stuff (that's why I posted my comment on The Pop Group post) and some Crash Course In Science titles (I have some but...), among others. In case... :)

My post is pretty inappropriate after your discussion, I did not read it before posting.
So, sorry to only talk about music, enthusiastically ...

Hi....No Problem Laurent.....in fact I was commiting the same sin that I accused the Pop Group of.....going on and on about politics instead of concentrating on the music.....s,in fact, your comment was perfectly A-propriate.
Glad you like the Blog.

Ha ha ok ! Sincerely, I have the impression of looting the blog as a thieve. A lot of bands I didn't know that I discover here, as A Witness for exemple, excellent.