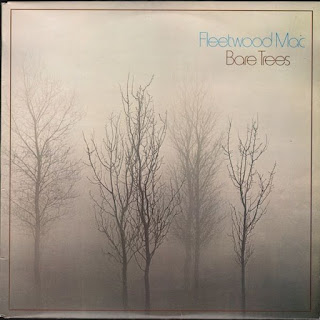 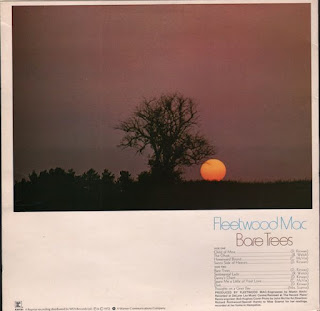 With a cover like it houses an Ambient Doom miesterwerk, this forgotten soft rock classic from a lost version of former UK Blues giants, Fleetwood Mac,finds our hero's searching,yet failing, for that elusive 'New',Saucy jack, direction that most groups from the 1960s strived for,but never found. Some were saved by having that career saving 'early death',like Jimi Hendrix for example, who was going downhill rapidly by 1970.
However, I find this a rather pleasant,if inoffensive listen ,and is my Fleetwood Mac record of choice.Showcasing, as it does ,the songwriting talent of the Late Christine McVie,to whom this is a back-handed compliment,she being one of the few members of the Mac who wasn't a complete tosser.
The horrendous ego's of curly topped Lindsey  'I'm a Clash fan me' Buckingham and Stevie Nicks...I was always confused as to which one was which......the most dull rhythm section on planet earth,and Peter Greens narcissistic moral outrage. Also, forget yee not, that at the same time in 1972,recently former guitarist Jeremy Spencer joined the Children Of God cult,and released his ,quite mad but trad,children of God Cult Lp,as "Jeremy Spencer and The Children".There wasn't just one loony-tune in Fleetwood Mac at the end of the sixties.
All this eclipsed  Christine McVie's envious ability to be normal, and write a damn fine tune. All of the best tchoons in their successful period were hers I noticed, after watching a BBC 4 Rockumentary on said group......Of course I had nothing to do with Fleetwood Mac at all in my yoof,so it was a revelation that they had some rather tasty songs to back up the success!?
This Lp attracted my eye,for the cover basically,and playing it sometime in the 80's ,i was astonished at the mind crushing blandness of it all, reminding me of the good Captain's 'Bluejeans and Moonbeams, which I grew to love while swimming against the tide of hipster opinion......come on 'Observatory Crest' would have been a hit when Fleetwood Mac were selling their crud to the unquestioning masses, if it had been pushed.
I like the cool kid clearing qualities of stuff like this...it takes talent to be this beige,but we forget that's what was trendy back in those bland 'Singer-Songwritery' days of 1972.This is what did for the career of my other female songsmith hero,the long departed Sandy Denny,who probably didn't die early enough to save her career,and should have remained reassuringly, Folk.
In the end the only ones left standing after the brutal Adult orientated Singer-Songwriter wars of 1972/1973 were Fleetwood bloody Mac;who went on to reap the vast crops others had already sown.Above all of this is that their major rock'n'roll legacy contribution is proving that one should never,ever, work with your significant other.The same goes for Friends too incidentally. If you have to work with someone,Always,ALWAYS, work with complete strangers;or risk losing your loved ones.
The best tracks are by the outstandingly ordinary Christine,plus Mrs Scarrots "Thoughts On a Grey Day"!?,which ends proceedings,rather bizarrely with a zero Mac member monologue,narrated by someone called Mrs Scarrot...of whom i have have no idea?
Recently, all our favourite, and less favourite Pop Stars have been falling off the tree,which is looking increasingly bare as every week goes by.
I was trying,and struggling, to think of something poignant to write about my Guitar Hero, Wilko Johnson,when I heard the 'other one' from Fleetwood Mac had died too,so, as I was struggling to put John Wilkinson's brilliance into monosyllabic script(basically there are No Words!), I took a right turn to show that we're open minded on this blog in the tribute department,and say Rest In Peace Christine....the trees are certainly, almost bare.
Tracklist:
1.Child Of Mine 5:09
2.The Ghost 3:58
3.Homeward Bound 3:20
4.Sunny Side Of Heaven 3:10
5.Bare Trees 5:02
6.Sentimental Lady4:35
7.Danny's Chant3:16
8.Spare Me A Little Of Your Love 3:44
9.Dust 2:41
10.Thoughts On A Grey Day 2:03
DOWNLOAD these fallen leaves HERE!
Posted by Jonny Zchivago at 12:15

Thanks for all that you do bruv. It is not just the music but the musings on the human condition that make this one of the best places that I go. Stephen. Portland, Maine. USA.

McVie was no Mimi Parker, but she was always alright by me--especially compared to her cohorts. In a sense, Fleetwood Mac were kind of an inversion of Low: absolutely batshit crazy seeming, yet utterly bland; whereas Low were bland seeming, yet absolutely batshit crazy--in that utterly sublime sorta way. First saw them--Low, that is--with Godspeed You! Black Emperor in late '98 (I think), and Low played with dynamics in a way that would make Robert Fripp blush.

Fun fact: I had always thought that McVie's song, "Don't Stop", was supposed to be kinda pessimistic and angsty, until I more carefully considered the lyrics a few years back. Another fun fact: if you download all the isolated stems from Rumours and assemble your own mix, liberally omitting annoying lyric bits and suchlike, a damn fine album is entirely possible.

Good to see yer "go your own way" here Jonny (oops thats a buckingham tune)... in all seriousness though nice write-up. In other sad news saw Hamish Kilgour has copped it now too... shit is getting depressing.

I also think the song "hypnotized" fits as enjoyable adult mush. Thanks for the post.

Eh Johnny let me stop you there...have you seen this?
https://archive.org/details/die-or-d.i.y.-full-archive

the best way to remember Christine McVie with Bare Trees with her song "spare me a little of your love"; this album also features the immense talent, as a songwriter, of Danny Kirwan, just before problems with depression and alcoholism forced him to leave the group. thanks for posting this album

@ Anonymous...WOW!....who the fuck has so much spare time as to archive my entire blog...other than me od course, but it has taken me 14 years to get where I am today!....well it saves me the trouble,as I was thinking about this last week,as i was convinced i had throat cancer and was thinking of ways to ensure Die Or DIY? continues after my demise.
I'll put a link for this great honour in the margins i reckon.
Thanks for the link......how did you discover this anyhow?

@ Heavy Dubby,
I was unaware of Danny Kirwan, as i am with most stuff that wasn't Glam in the early 70's.Tis very interesting for me. I enjoy the blandness and the acoustically dead recording studios....the blog may take this direction to entertain me.....but its the Medway Sound before that i think?

@ Parmalee....McVie had that natural normal-ness,kind of unconsidered ordinariness whereas Mimi's Natuarl naturalness was slightly more considered from the word go,as looking Normal scores brownie points aplenty with North american indie types.
I've tried to be normal myself,but looking like the nutter i am.i've always failed....i could have fitted in with the rest of Fleetwood Mac,and still have ambitions to be bland one day.

Ah !... I think i was the first to play Miror Man in parties. When some years later i played Observatory Crest and Bluejeans... the said I was an has been. Just because R&F critics had decreted Cpt. Beefheart was definitely out. Poor "hipsters" you say ? Observatory Crest was just the continuation of Autum's Child or Call on Me... Fuck the hipsters. Emotion is the one and only rule. LB

Re: Rumours album mentioned by one of commenters here - members of Quickspace re-recorded it under the name Dougal Reed some 20+ years ago. A strange effort, indeed. Also, very much DIY.

That whole group of Fleetwood Mac albums post Peter Green
that never really had a hit are quite interesting. Meditatively unexciting. Kiln House, Future Games, Mystery to Me, Penguin, Heroes are Hard to Find. Lots of good guitar sounds. Like they were doing it because they loved music and not themselves.

That can't be your full blog at archive.org. Does it have next month's posts on it?

@ notthfieldhat....yes, in fact it has the next ten years posts already there.
..i think its just the music and pictures......alas none of my incredibly insightful and thought provoking bluuuurgg!

That bland sound is what i was getting at with the little knon fleetwood mac praise. Also dead as dust is beefheart's spotlight kid and spotlight kid outtakes!and Faust 5

Yeah Spotlight Kid is like being drowned in room temperature treacle.....not slow enough for me.Apparently ir was so Don sould express himself vocally as the great blues singer he thought he was.
And there was always something i didn't like about Faust's guitar sound that annoyed me.....the wrong kind of transistor sound,all fizzy and surplus to requirements....and if i'm no mistaken,always in mono,and spaceless.

You're spot on about the Faust guitar, but some think that is THE sound. But LOVE Faust's drum sound (from 1st album to "You know Faust)