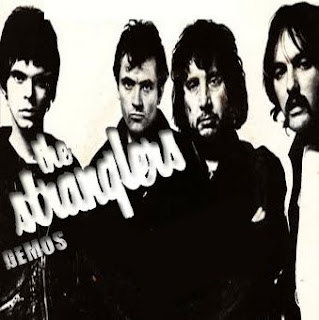 This comes under the category of groups who were social suicide to admit you like back in the halcyon daze of the Punk Rock wars of 1977. Basically they were obviously a lot older than a Punk Rock group should be,they had a keyboard player,and half of them looked like the kind of Pub trash you'd find in 1975,mustaches,suits and beards,like background extra's on the Sweeney.......not stylish Sweeney extras like Dr Feelgood,or The Pirates,but the ones who'd get beaten up by Jack and George to get information.
This may not sound like it, but this is an obvious attempt a a tribute for erstwhile Stranglers drummer and Ice Cream saleman, Jet Black, who passed away yesterday-ish at the remarkable age of 84!? He was older than Paul McCartney,and was 40 in 1978! This guy lived through the entire history of Rock'n'Roll! That's him with the beard and portly stance...was this the only Beard in Punk Rock?
Yeah, I secretly dug the Stranglers, most especially JJ Burnel, whose Bass sound and playing launched a tidal wave of Lead Bassists on the country, and made Post-Punk a reality. Unbeknownst to me Jean Jacques was an accomplished classical guitarist before he fatally thumbed a lift from Jet Black in his ice cream van,and ended up in The Stranglers in 1974. Yes that 1974, which Ramones fans always quote as evidence that they were indeed the very First Punk group......they did "I wanna be your Boyfriend" and the Stranglers did "Go Buddy Go" that year,and displayed uncomfortably long hair,....but, the Stranglers had less long hair,and were noticeably more aggressive.
They were in fact part of a very Proto-Punky movement,which fit their image far more than the glammed up MC5 or The Stooges, Pub Rock....of which one could argue that the Damned,Clash and The Pistols were also part of.
Nowadays, as Jet's Guardian Obituary states, The Stranglers were (accidently) the very First Post-Punk band, as well as tenuously the First Punk Band, with their "Darker" album, "Black and White",from 1978, beating previous favorites , Magazine, and Siouxsie and the Banshees to the title....which is a recently tendered attempt at rewriting history,by burks like John Robb and his equivalents  ,while forgetting  in retrospect,all this was still referred to as 'Punk'music at the time,and only later were things reassigned,depending on your definition of what its supposed to be.
For me, it was always the music that came after the first wave which obviously wasn't three chord Punk,like XTC,Devo,Talking Heads etc...which also included the 'Darker Side' like Joy Division ,Bauhaus, Pere Ubu etc.
"Punk Rock said Fuck You, and Post-Punk said I'm Fucked" has become the catchphrase these days.
So allow me to pick my own first Post-Punk album, and it ain't the Stranglers,or Television.....it's obviously Ultravox innit? "Ha! Ha! Ha!" from 1977....ticks all the boxes for me.
So to celebrate Jet's very understated underplayed drumming as part of one of the most un-categorisable  group from the Punk Rock era, here's a load of slightly dodgy pre-punk demo's from the magical year of 1974 onwards!?
I once thought "Go Buddy Go" was cover version when one first heard it,and was sure it had to be a UK R'n'R classic by someone like Johnny Kidd,until i knew better.....a JJ Burnel composition no less!?
Also the first time I saw a 'Punk' group on the telly was Stranglers doing 'Go Buddy Go' on Top of the Pops....the A-side,Peaches, was banned of course....tee hee hee...they swapped instruments.....and there may have been a rather naughty expletive on Burnel's T-shirt. However,JJ's hair looked a bit too fluffy for my liking,obviously just had a shampoo in the BBC make-up dept before the performance.
Jet, as always stayed in the background,gently miming his drums,which always sounded mimed anyway,so why bother?
Tracklist:
1. Charlie Boy*
2. Chinatown*
3. Make You Mine*
4. My Young Dreams*
5. I Know It*
6. White Wedding*
7. Country Chaser*
8. Bouncing man*
9. Wasted*
10. Go Buddy Go*
11.Strange Little Girl*
12.Bitching#
13.Peaches#
14.Tomorrow Was the Here after#
15.Down In The Sewer#
16.Grip#
*1974
#1976
DOWNLOAD a demostration of jet's ability to not be black HERE!
Posted by Jonny Zchivago at 13:20

Nicely, Jonny. I always thought their 1st album was one of the best of the 1st wave punk bands' releases. Dodgy lyrics aside, it's an evergreen classic, a musical tour de force that many at the time tried to diminish somewhat by comparing them to The Doors.
In re: the t-shirt - i recall Cornwell getting into trouble over it at the time, but i can't remember if that was down to the naughty word on the front ('fuck') or because its font mimicked the Coca Cola design. Perhaps both?
As to the Ultravox! album, yes yes yes, a trailblazer. I know a lot of fans at the time disliked Wrokrock for being too, well, rocky, but it's in my all-time top 20 45s. A fucking amazing band ('til John Foxx left, at least.) If you could do for them what you've just done for the Stranglers (i.e. unearth some early, rare stuff), my exmess would be complete.

Thanks for this.
Black and White was the first album I bought - think I was 12 - and a couple of years later they were the first band I saw live.
Gutted to hear of Jet's passing so quickly after Dave Greenfield; they stood out as a band because they refused to confirm to anyone's expectations.

The Stranglers were the first punk band I heard and bought. Joe Strummer was a fan in his 101ers days until he joined The Clash - didn't fit with his new image - that's the time when the Sex Pistols and the Clash became spook assets.

"This comes under the category of groups who were social suicide to admit you like back in the halcyon daze of the Punk Rock wars of 1977" - Yeah, you often talk about the (good?) old days when music in itself shocked people and made a difference. When album releases and the new sound of the day was the thriller. Today nobody (especially youth) cares if let alone listening at all to all these weird or upsetting sounds. What shocks some today might be the the lyrics of the more extreme of gangster rap and occasional neo nazi bands. The rest is just air and everybody's used to it. Thomas Di Leva of (some kinda) fame once said in the 80s: "soon we're sitting at the ageing home, listening to Clash". Much to it.

Thanks for this!!! Black and White album will always be in my top 10 all time favorite albums, No More Heroes was among the very first albums I bought (along with Lust For Life, Never Mind The Bollocks and a very weird Dutch compilation album called "Geef Voor New Wave") in January '78... I started looking beyond your typical punk like the Cockney Rejects etc. fairly quick and it was because of bands like The Stranglers, Gang of Four, Wire (not to mention Metabolist and This Heat) and James White & The Contortions among many others....

@ henk...indeed my sister was a stranglers fan, so rhe first three albums appeared in our house pronto like...I sold her copy of Black and White in 1980 (minus the free ep in white vinyl naturally) at school for £1.50....then the kid brought it back to school the next day wanting his money back because it was Shit....of course this gave me the gleeful opportunity to remind him of the 'No Refunds' policy I was known for since i sold a picture disc of "Are Friends Electric" (Tubeway Army) which was a picture cut from a NME advert and glued on to one of my sisters Bob Dylan singles.....Oh How we laughed.

Totally forgot there was a free ep in there! I had a cat piss on the inner sleeve and it stunk for years and years... 1 Pound fifty seems like pretty cheap to me... Tubeway Army... Gary Numan... Didn't he race cars too or something? And btw... The Stranglers.... Hugh Cornwall... You have any idea what the big break up between them was about??? I always wondered, seems to be some really bad blood between them....


Rest in Peace Jet Black ! Thanks for this remembrance/appreciation... Though I was always partial to the "Hugh" years, I remain a Stranglers fan to this day. "Giants" from 2016 (?) is quite impressive and the current post-Greenfield release is growing on me.

@ Henk...£150 was not cheep in 1980...nearly doubled my pocket money...Free Ep...white vinyl with Walk On By on it.
There seems to be a thing with cats and vinyl...i've got some pissed on albums from my cat loving neighbour....Siouxsie and the banshees got pissed on,very apt, and The Jam Snap,and Frankie gores to Hollywood is virtually dissolved in Piss. Maybe a couple of Rolling Stones lP's as well?
Gary Numan flew planes...my brothers mate won a competition to get flown by Gary from Leicester Aerodrome back in the day.....he gor some stick for that...although i was quite envious.
The big break up of stranglers was because Hugh was bored of the limitaions of the Strangflers, and he was sick of the violence..... JJ was not a happy bunny which made it worse. The bad blood conrinues because he was offered the chance to come back as the "Original Lineup",and said no way...further annoying JJ, whom you should definitely not annoy.

Really great band regarding their songwriting and sophisticated sounds. If I have correctly figured out they were older than their contemporary punks. I do even doubt how much did they care of the punk scene as if running a parallel world to distil the so-called ideal pop. I bought myself it and it used to work for at any time
https://www.discogs.com/release/8401999-The-Stranglers-Original-Album-Series

Nice, muchas gracias!!
I still have my vinyl copy of No More Heroes, one of the first punk albums I bought.
For me, the first post-punk band was Wire, hands down.

The Stranglers were always A-Ok in my book. History re-writes are a funny thing. The players with the best publicists get the headlines so thank you Jon Savage and Paul Morley. The Stranglers weren't considered cool and hip by McLaren and the London dilettantes so like the Vibrators, 999 etc. off into the dustbin of cool they went. I understand drawing lines and making enemies is always important when establishing a "scene", but come on. Anyway from across the pond it was all the same Punk/New Wave or whatever. I'll stan for those first couple of Ultravox LP's till the day I go deaf. I'm absolutely convinced if say "Systems Of Romance" had come out on Factory or say 4AD it would be considered an absolute post-punk classic.