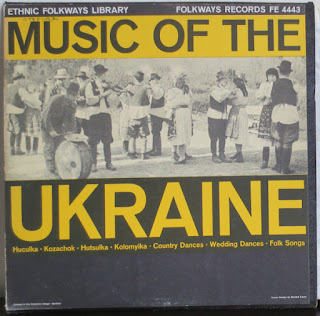 Its got sleeve art like a Swans album,adorned with a black and white photo of what appears to be soviet Ukrainian relatives of Blitz era Spandau Ballet,yet it sounds like the soundtrack to "O'Brother Where Art Thou? 2", and showcases a glaring error, much repeated by us ignorant Westerners, referring to Ukraine as 'THE' Ukraine....It's just 'Ukraine' in fact, no 'THE' involved,or,indeed, needed.
There must have been a sizable influx of Ukrainians ,fleeing pogroms or revolution to the Appalachians in the first half of the 20th century,as this Ukrainian Folk could easily be some weird bluegrass from Harry Smith's anthology of American Folk. It's just lacking a few Toothless Donbas Dumbass Hillbillies,or some moonshine damaged hick called Blind Lemon Shevchenko dueling balalaika's and banjo's with Dock Boggs. There was certainly no British folk that sounded like this anyhow......not enough senseless slaughter going on in those sceptered isles it seemed, at least up until the potato famine that is; after which the terrors of Irish pixie dancing music were deliberately exported to the fledgling USA by the British governments attempt to starve Irish Dancing out of the empire for good.....then Michael Flatley happened and now its too late to do a Potato Famine two....we're stuck with it!
I'm struggling to locate any contemporary Ukrainian music that isn't generic and western via Moscow leaning.....but this shits weird! Get it before Putin erases the tapes and removed anything vaguely Ukrainian from the planet,while moaning about 'Cancel Culture'. Betraying a very well hidden literary intellect, this jawless,joyless, dwarf,intellectually and physically,desperately accuses the British Government of trying to cancel Harry Potter! That bunch of twerps are responsible for many things, but tragically not cancelling all things J.K.Rowling.They couldn't even get that right!? I honestly despair of them. Tax cuts for the Rich funded by eye watering borrowing requirements,and sweeping welfare cuts for the poor,yet they don't have the balls to cancel Harry Potter!??? What is this world coming to?.......a heavily irradiated ending it seems?.....but at least Harry Potter will cease to exist along with the rest of us? Happily there's a bright side before the Electromagnetic wave of thermonuclear destruction wipes all hard drives and all data that proved we ever existed......but if those who inherit humanities position as super selfish food chain toppers,and string two extra brain cells together, ever find an intact copy of "Music Of Ukraine" hidden in a lead lined nook somewhere....with a record player of course? Then they are gonna have a funny idea that there may have been a mysterious civilization who, once upon a time, left this molten highly radioactive landscape to the next bunch of self-destructive morons.
Just like those mysterious chaps on Easter Island...what was going on there then?
Tracklist:
1. Gutsul Kolomyika Dance-Song – Oleska Suyhodolyak With Bagpipe Acc.
2. Kozachok Dance-Song – Ivan Martishchuk With Bagpipe Acc.
3. Huculka Dance – Carpatho Ukrainian Village Orchestra
4. Country Dances – Carpatho Ukrainian Village Orchestra
5. Wedding Melodies – Hutsul Ensemble Of Folk Musicians
6. Hutsulka And Kozachok Dances – Hutsul Ensemble Of Folk Musicians
7. Folk Song - The Wind From The Field
8. Folk Song - One Half Of The Garden Blossoms
DOWNLOAD the folk music from a people and a place that, according to a certain autocratic dictator,doesn't exist...find proof that it does...HERE!
Posted by Jonny Zchivago at 14:16

Hj Jonny. I've managed to track down a few albums like this. They seem few and far between, often appearing on state record labels. Not surprising: for much of the 20thC the Soviet Union did its (un)level best to eradicate all trace of ethic identity from the regions it subjugated. Hence that 'THE': it was a deliberate attempt to minify and belittle Ukrainians, making it sound like a region of no importance, a minor part of the greater whole of the mightier Soviet hegemony. And we in the west, smug in our imperial superiority were happy to go along with it. The 'the' wasn't dropped until the USSR imploded.
I'm really looking forward to this: there's often an atmosphere of wistful melancholy to eastern European music which echoes the suffering and pogroms they endured. It's eastern blues, and i love it.

I'd bet the record is older than you are, and that's why the cover looks like it does! When I was a kid we found these records in libraries, not in record shops. (The shop in the center of my home town certainly didn't have a section labeled "world music," but it did have a very silly looking album of Irish drinking songs, which was probably still there the day they threw everything away so they could open a Starbuck's.)

When I was older and could get into Harvard Square in Cambridge (Massachusetts), I began to encounter a much more elaborate culture: genres I'd never heard of, on labels like Folkways, Nonesuch, Deutsche Grammophon... this was back when I thought the Jefferson Airplane was the greatest band in the world.

Mandolinny.....it is older than me,sadly only by 13 years....so happily i never encountered Jefferson Airplane until i was in my thirty's....i was disappointed.

rev.b....we are all ukrainians now.
I got some eastern European (Ukrainian) funk comin to flex yer magic muscle. Black music played by the whitest mother fuckers that ever strayed beyond the 4/4 gulag.

"we are all ukrainians now."

Your silliest take yet. Thanks for the music.

I can get sillier fanny.

The place where this comes from (the Ukrainian Carpathian mountains) is similar to the Appalachians in a lot of ways, so the comparison really isn't that far off.