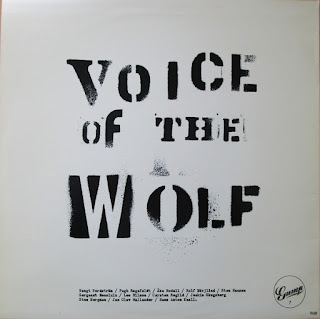 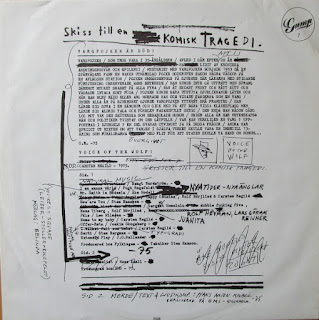 As mentioned by fountain of all knowledge prog, Ian......sorry, no other form of identification is available or needed.,as if in a biblical tense therein.
It has been rightly pointed out,in the comments section that the Swedish groups that tagged along with the Rock In Opposition lot were actually part of their own scene.Manifesting itself around the time that ABBA won the Eurovision Song Contest; called "The Movement" or the much more specific "Progg" ,with two gee's.
The "Progg" "Movement" encompassed many different musical genres from Sound Poetry to Avant Prog
The political progg movement,mainly self-righteous communism with music, culminated around the 1975 Eurovision Song Contest, which was held in Stockholm after ABBAs victory in Brighton the year before. It was expressed that "music can't be a contest",everyone is equal kinds stuff, and an "alternative festival",rather like the Rock In opposition festival a couple of years later, was held in protest.
In theory 'Samla Mammas Manna' might well be the only group to have played both?.Due to this debate,and part 2 of the eurovision trivia trail, Sweden did not participate in the 1976 Eurovision Song Contest,rather surprisingly....leaving the door open for The Brotherhood of Man to claim the top prize with the dreadful "Save Your Kisses For Me",and that little dance they did while we screamed in unfathomable pain!
It was as if these awful townie torturers were dancing at the impending death throes of the Progg movement that they, and many others,including myself,never knew existed.But, by the time Abba were divorcing each other,Progg killed itself in a sea of pinko posturing and the Swedish predilection towards hard rock and punk rock,being one of the few places that the Pistols actually played in.
The book of Ian, also mentioned an impossibly rare Swedish human called Carsten Regild....who had an impossibly rare single released on Gump Records i am told;but, No i don't have it, but this funny fella Carsten Regilid appears a couple of times on this Progg compilation from the year of ABBA's arrival...there is no suggestion that any member of ABBA was in a Progg band,as far as I an aware.
Carsten's contributions err more on the side of Sound Poetry,with an ironic early Rock leaning.This guy is Kerrrazzzy!
Most of my knowledge of Sweden during this mixed up epoch is of the Tone Poem, Sound Poetry,tape collage scene which was, and still is firmly sellotaped to their cultural identity. The Great Sten Hansen is the sound engineer on this to the mysterious Carsten Regilid's role as Producer.....as well as being valuable contributors.
So don't expect any lost Gentle Giant copyist numbers on here...these guys are really nutz!...but that's how we like it innit?
(*wolfie Smith : much loved joke commie character on UK Tv in the 1970's)
Tracklist:

DOWNLOAD the voice of wolfie smith* HERE!
Posted by Jonny Zchivago at 14:37