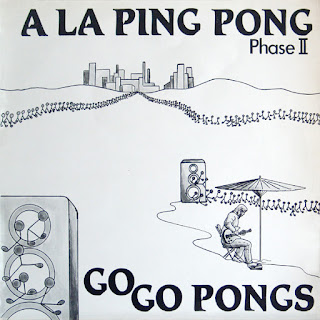 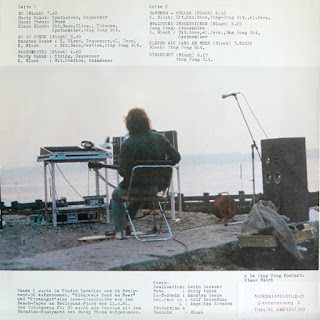 A La Ping Pong did second album shocker!? (Get the first one here).
German sits on chair and noodles along, ambiently, with his guitar to a backing that now includes humans...yes, he has friends. He still sounds like that infamous law firm Oldfield,Fripp,and Oldfield ,but at least he had the good sense to pack all this self-released album malarkey in for a couple of decades.
Yes indeed, like the rest of the 'rediscovered' music wave at the turn of the millennium, even Klaus Bloch (Herr Ping Pong himself) was exhumed from a comfortable retirement to show us why olden days music is soooo much better that the derivative shit of today's WHY? generation.
To coin a phrase,Yesterdays derivative shit is far far better than today's derivative shit; I think you'll find that statement  stands up to scrutiny in laboratory conditions.
I've always liked a black and white album sleeve,and also strongly believe that every member of a band should be firmly seated,especially the bloody guitarist.Maybe Klaus couldn't stand up at all? I dunno, the only pictures I've seen of him has him seated.Normally surrounded by technology.
Please excuse me,but to increase the hit-rate for this article I have to add the tiresome noun "KRAUTROCK" to the recipe......it's very popular among those who would like to seem obscure but really aren't;but i must admit, A La Ping Pong is certainly obscure,but its qualifications to actually be called "KRAUTROCK" are somewhat tenuous apart from the fact that Klaus is certainly a German.Not that that changes anything.There are American groups who get called "KRAUTROCK"....dunno what's going on there,but at least i got to insert the keyword three times.
Google will be going mad for these pages.
Tracklist:

Thanks for the heads up. I'll take you up on these, seeingMr Pong is represented by the law offices of of Oldfield Oldfield & Fripp. Quite.