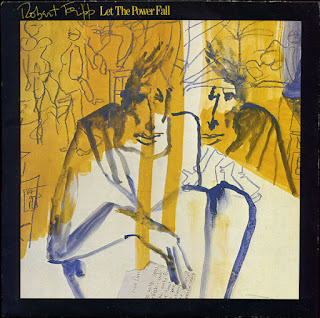 Fripp, as he referred to the touring version of himself,a 'small compact unit', treating us to a album of Frippertronics; which,if you didn't know, is Bobby improvising with tape loops of himself, through various delay units and effects.
The effect is very hallucinogenic,and meditative. The studio version of this music lacks a little bit of the immediacy that cold be generated on the many live appearances he made in cafe's and shopping malls all over the western world on the cusp of the eighties. He dressed like a business man and certainly saw himself more as a business man than a musician,and wasn't afraid of a lot of actual hard work.Something that frightens the living shite out of a self-titled musician.Refreshingly, our Robert,always made it clear that he wasn't a natural, and created his style(s) through sheer endeavor, rather than the Jimi Hendrix route.The result is a thoughtful, considered style, full of technical exactitude.Something reflected in his manner and self-presentation.An admirable anti-rock stance that was invigorated by the onset of the so-called 'Punk Explosion'.He stood apart, but ultimately fitted in.
The end of his so-called 'Drive to 1981' concept, and the start of 'The Decline to 1984' period.
Fellow outsider,Lemon Kitten Danielle Dax provided the artwork by the way....certainly a step up in collaboration class from Darryl Hall.

DOWNLOAD some falling power HERE!
Posted by Jonny Zchivago at 10:53

Nice one Jonny, I've been looking for this one. Fripp totally needs to authorise a decent reissue, old CDs of it are going for silly money.

One of my all time favorite albums.

Thank you! Does anyone know if those pops (as heard, for example, in the first second or so of track 1, and continuing on) are glitches or is that how it's meant to sound (due to the Frippertronics system)?