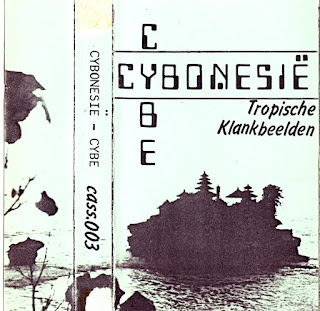 You know what? I forgot to post the third and final Cybe cassette from one of the more dodgier periods of Rock'n'pop's golden era , 1985. One to rival 1974 for clueless awfulness,but still better than any year from 1989 to 2015.
You could be forgiven in thinking that Cybe had lost his mojo with his third cassette release. Its more or less an electronic version of Martin Denny's Exotica.  He's obviously been saving up his Gilders to buy one of those new fangled digital synths,and a sampler,to make this ethnically coloured trip into the space-age batchelor pad of the mid-eighties.
It falls into the trap of synths trying to be real instruments syndrome, or syn-drum(?); which is never recommended.
Still has a few hooky melodies floating around the Gamelan simulations and factory standard sitar samples(was this an Ensoniq Mirage by any chance?),but the drum machine seems to still be analogue;so it ain't all bad.
On the evidence of this, Cybe didn't do anymore tapes because he fucked off to Bali to hang with the natives?!

Thanks a lot, Jonny! Hope you're doing okay. Steve

Actually, this is really spooky! On hearing the news in the comments section of the Cybernetika rip you posted the other month - that he is now a wedding photographer, I remarked that "I was imagining Cybe AKA Seibe in a self-imposed exile on some Indonesian island, wearing over-sized cyberpunk shades and laying down the blueprint for the music of 2035"

And lo and behold, judging from this release, which translates according to big daddy google as 'tropical sound images', I wasn't far off the gilders - though clearly my assessment that he was creating the music of 2035 was off by exactly fifty years as this is sadly, exactly the kind of music that was created in 1985!

Obviously the Balinese 'Elektro Gamelan' sound is a nod to 23 Skidoo and artists like the German band Tri Atma and even I guess, Merry Christmas, Mr. Lawrence and My Life in the Bush of Ghosts, though your Denny's Exotica goes electronic analogy nicely sums up that entire western electronic music and third world cultural 'fusion' (I can hear Edward Said's disapproving tones in the background).

As for the 'Pinky & Perky tour the Orient' music, like you say, it definitely suffers from Fairlight syndrome (if I could go back in time, before I had a pop at Hitler, I would be gunning for Peter Vogel and Kim Ryrie, who ruined eighties music) - though in all fairness, it does have some moments like 'Anklung', which vaguely harks back to the genius of his first two tapes.

Many thanks anyway, JZ, at least we can all share the disappointment collectively!

Indeed, the Saucer Person, it all started going tits up with that Womad festival in 1982. Middle class chappies thinking it would be a wizard prang to pretend to be an ethnic person,and to like ethnic moozic,because we're not rascist are we.So lets steal the good bits and turn them into shit bits,mixing it up with our shit western technology.....Peter Gabriel was the main culprit,driven by public school guilt and a taste bypass.
Although 23 Skidoo did a descent urban ethnic set,released on side one of "The Culling Is Coming" to offset the utter drivel of the Gamelan wankery on side two.
I suppose it wasn't really the technology that is to blame, it was the way it was used.Like whats the first thing you do with a sampler when you get it?...either you belch into it,or sample a dog barking?....thats pretty much what happened for several years around n-n-n-n-n-nineteen eighty five.

Good call on the self imposed exile prediction.
Sometimes we is just too darn clever for our own goods.

Not many artistes manage more than two classic albums in a row,but at least Cybe managed the two.

Yeah, forgot to put Gabriel up against the wall of the guilty, so thanks for the reminder. I am very proud to say I never went to any WOMAD (though I think I came close one year as the Burundi drummers were playing, luckily good sense and getting told it was much harder to crash the fence a la good old Glastonbury, which was piss easy for many a year, meant I came to my senses).

Totally agree about very few artists ever making three in a row classics, and the first two Cybe albums (minus the ambiance) are absolute classics of minimal synth goodness, albeit unknown to the vast majority of the electronic music world outside this blog and a few aging Dutch geezers.

I'm glad to see you saw through my obvious transparent attempts to conceal my utter smugness on predicting the form and content of the third Cybe album, oh, vanity, vanity!
(the unsightly human kind, not the utterly magnificent Japanese label of the same name, that is.)

Why do I talk Weird? Wasn't aware of this eventuality? But it sure beats talking normal,that's a sinister by-product of 'The Hive Mind' that is strangling originality.

Yeah, there was a malaise on the pop charts and in the NME, but in retrospect it's one of the great years for album releases.

A few turkeys in there mate.....but of course every year has some good albums, I doubt anyone would have been able to hear or see a picture of, never mind buy, 'Meet the Residents'.Apart from that,and Dr feelgood, i don't see much New music there, just stuff from the same tired old names who were around at the turn of the decade......was that the year of the oil crisis ,where record companies didn't sign anyone with no proven track record because of the vinyl shortage?
Maybe 1975/76 were worse.....tuff call.