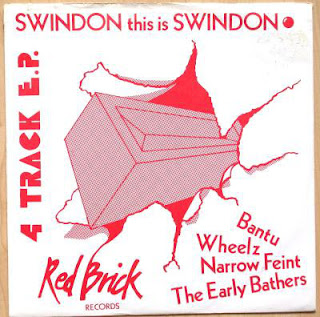 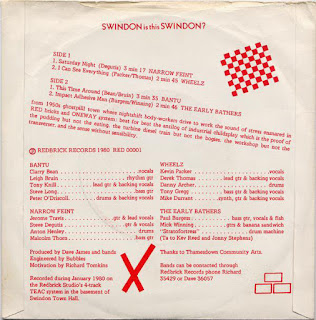 I 've been to Swindon but once, to support my beloved Leicester City against the home team in the second tier of the English football league in about 1993. I'm damned if I can recall the score, but Glenn Hoddle was their player manager...he's the one that got sacked by England for saying that disabled people must have done something bad in a previous life.....so that's him disabled in his next life then?
The other 'bad' thing Hoddle did was manage Swindon Town FC when they beat Leicester in the play-off final at wembley with a contentious penalty after the Foxes had come back from 3-0 down to level the scores. Swindon got promotion to the Premier league and got thrashed every week,never to be heard of again......rather like the Bands on this Local Bands EP.
Hoddle was also incredibly guilty of releasing a pop duet with be-mulleted geordie mate Chris Waddle, called "Diamond Lights",another moment that had to be endured gazing through one's fingers. Don't do it Glenn,we implored,but...too late!!!!
Also the very great XTC came from Swindon.Those slight americanisms in Andy Partridges vocal inflections were actually his local west country accent, not an attempt to mimic those American pop stars we all love.....not that I can name any,they were all Canadian anyway. Probably explains why there's a growing cult stateside for XTC.
Alas,no XTC on this EP however, just a quartet of post-punk and power pop also-rans....y'know the kind of stuff we all love . "Narrow Feint"...wot?....do a deaf glee club party's version of Elton John's "Saturday Nights Alright for Fighting".......i'm in no doubt Sir Reg and Bernie Terrapin would sue if they ever heard this blatant rip off of their terrible yob-glam anthem's chorus.
The terrible names continue with "Wheelz",whose charming ditty will have you whistling all afternoon;.... whistling what, is another story all together.
'Bantu' treat us to another belter that you're sure you've heard somewhere before....it'll come to me.
'The Early Bathers' (how do their minds work in Swindon?) finish off with a tune you culd have sworn was on "Hicks From The Sticks"....or at least on "Songs From Pigland" which was the LP version of the local yokal post-punkers around Wiltshire.
Its charmingly simple stuff,and we love it.....another UK DIY classic.
Tracklist:

'The great rock'n'roll Swindon' is one of your top 10 puns.

You know what?...I think you're right!