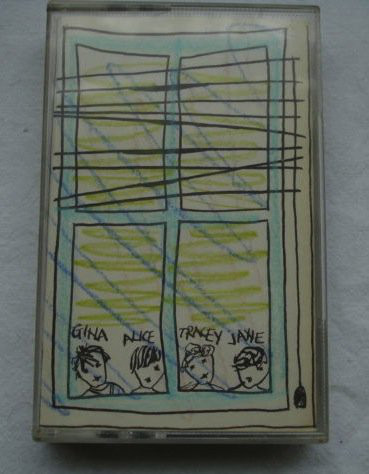 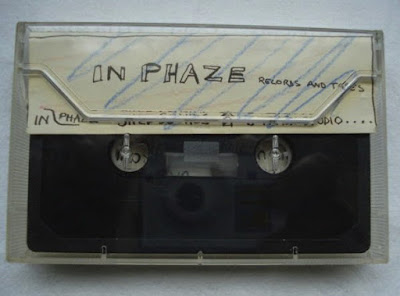 Once upon a time,back at the Birth of the Indie Sound,which was specific to the British Commonwealth only. We find four sixth formers from Essex taking Young Marble Giants' minimal de-butched rock and putting it through the mangle, squeezing out everylast piece of alpha-male rubbish and flushing it.Also obviously influenced by the Raincoats' demasculated post-punk they were spotted by Indie group numero uno The Television Personalities,who released this on their own Whaam records as a proper LP.
Ok, so Tracey Thorn went on to adorn the coffee tables of the Thatcher 'loadsamoney' generation, but this was one big v-sign,middle finger, to all those butch punkers who,instead of destroying that uber macho Rock nonsense,carried it on,but with a sillier haircut. The Marine Girls were the unwitting pre-cursors of an indie pop future,you can't get Twee-er than this,but,oh, how they tried!
Kurt Cobain was a fan,as he allegedly was of Young Marble Giants also........again.....was he actually listening?
It's not his fault,just another victim of the American need to 'Rock Out Maaan'.This is also why the american Indie route led directly back to where it all came from.....Rock,but this time renamed 'Grunge' for some unfathomable reason.Long hair was back and feet on monitors,calls for seeing hands in the air were heard. In the beginning of the post-punk period,as Punk never really happened in the USA, all the groups wanted to be Devo before they reverted to type,so all the American groups were herky jerky Devo-a-likes,before eventually mutating ,maybe via hardcore, into Dinosaur Jr....which was thee proto-grunge band or what(?); or The Jesus Lizard,who were still Devo really,but Rocked Up and dressed down.
Meanwhile there were no Grunge groups in the UK,post-punk had gone pop,and all that was left were just twee indie bands,and nothing else until Ecstacy hit in '88....and we all know what happened then don't we.Stll living with the consequences today. Just thousands of types of 'Metal' and 'Hip Hop' are the dreadful result of all this chaos.
Recorded at the In-Phaze garden shed.
Tracklist:

A1 In Love
A2 Fridays
A3 Tonight?
A4 Times We Used To Spend
A5 Flying Over Russia
A6 Tutti Lo Sanno
A7 All Dressed Up
A8 Honey
B1 Holiday Song
B2 He Got The Girl
B3 Day Night Dreams
B4 Promises
B5 Silent Red
B6 Dishonesty
B7 20,000 Leagues
B8 Marine Girls
DOWNLOAD on the count of twee HERE!
Posted by Jonny Zchivago at 11:54

I would argue that it WAS cobain's fault.....they didn't do things any differently than any other band once the bigtime hit. That was their choice. The famous picture of him wearing the diy shirt that said "corporate rock still sucks" still gives me a big laff...he didn't notice the "i'm with stupid" finger pointing up at his head on the shirt. It was on the cover of rolling stone. So yeah, he was right, corporate rock (nirvana) does indeed suck.

Of course it was Cobain no brane's fault....I was just trying to be nice for once. Christ how i hate Nirvana!!!!! The very fact that an act that proudly boasts that 'corporate rock sucks' with faux irony,is then marketed to sad kidz the world over by corporate rock labels, is nothing short of sickening....why do we bother? Cobains t-shirt choices were enough reason for anyone of us to hold that shotgun for him and run a simple competition to see who gets to pull the trigger. Me pleeze! I think I hate music in general,almost as much as i hate the twats who make it!

Beach Party - big whoop. Let's see you score and post a copy of A Day By The Sea, tough guy.

Thanks! I love it!

Oh No You Di'int, Johnny! "Punk never really happened in the USA"?! Wot? Now, granted, we Yanks needed you Brits to show us the way what with the playin' dress-up with the safety pins, ripped shirts, disheveled hair and what not ... oh, what's that now? Poor Richard's sayin' that was "his thing" first?! "Zip it Richard, I'm talkin' to my mate Johnny Z here!" ... Now where was we ... oh yeah, well with the leather jackets, power chords and the "we don't care" thing then! Yeah, clearly that all started with Rat Scabies in July '76 (basically thumbin' your nose and spoilin' our big b-day party then were you?) while we were just sittin' round sniffin' glue.

Right you are, fuck "New" York anyway and the big ass chip on their shoulder -- any town named after the Motherland ain't worth tuppence anyways. But that giant concrete shithole LA had some bands that might qualify as more punk than Devo (not that they weren't punk in their early days) and less "grunge" than Dinosaur Jr? You probably even heard of some of them even, like, uh ... the go-go's and ... SWA and um ... Tom Troccoli's Dog?

Now you lads did get a bit of a jump on the whole skinhead and suspenders get-up; credit where credit's due! We were more "Oy Vey" than "Oi Oi Oi!!!" here sadly ...

Ah, I know you're pullin' our chain anyway -- you've stirred this worm can a few times before. Cheers Mate! (bloody limey!)

Mr Dave, yeah those whining Noo Yawkers!Sure I'm pulling your plonker,but Sure the Ramones invented Punk Rock alright, with their long hair, Bay City Rollers fixation,and that bubblegum singing style...sure they did revive the keep it simple method from their 60's heroes which was much needed,and they did start in 1974 before the Pistols, but the same time as The Stranglers.....so that means the Ramones and the Stranglers invented Punk Rock in that case!?...not.Then Maclaren added the meat to the kitch in a bid to sell Clothes....very sucessfully.
Hell, how dare David Bowie steal his hair cut,and an interest in dommy Poetry.
As for the Bohemian set, P.Smith(hippie), Television (Quicksilver Messenger Service tribute band), Hell (chip shop bowie), The Dolls....Glam the like of which the UK was flooded with,minus the Heroin Chic.
Detroit had lots of bands pissed off with having to live in Detroit,so played amped up Biker Rock to compensate,before Iggy went Glam too.
No basic rock with funny clothes and dodgy politics in the whole of the rest of the US except for LA,which got their inspiration from UK imports,Jello was in london in 77,so guess what he did....Rollins and his mate MacKaye solely listened to uk punk imports.I like the LA Bands however.
We can keep going back,The Stooges invented it, but then you could say it was The Kinks, Troggs,Jerry lee Lewis......its ridiculous.
Personally i want nothing to do with 'Oi',but the UK can't blame anyone else for that, sorry also for the white Skinheads too.
Punky Rock got its identiy solely from the Sex Shop in London,anything before that was something else...NOT Punk! Thats where the style was born...fact.
I heard The Ramones after the Pistols, and i couldn't believe what i was hearing,more like The Beach Boys at 78rpm than anything dangerous.
In return we gave you The Exploited in revenge.
The Go Go's?....wot belinda carlisle?....The Screamers,Pink Section and many more were certainly something to boast of,up there with a lot of the post-punk morasse the other side of the pond......could talk about this all day,but fuck Punk Rock.....which is what was intended from day one,but we took it seriously!
Thanks for taking on the challenge,no-one usually takes the bait.

Right you are! I don't disagree with any of this. And I was just being cute about LA by picking the worse bloody bands I could think of! Being on SST records pretty much guarantees you aren't "punk" unless you're pre-Hank Black Flag or the Minutemen. And 1984 is where I draw the line -- "hardcore" was a parody of itself and Huskers, et. al. started something new in '84. But '76-'80 in the City of Angels?! Fuck me if that weren't a well spring of unbridled creativity: The Dils, The Weirdos, The Screamers, Germs, The Dickies, Bags, X, Middle Class, Minutemen and even some of the early 80s band weren't too bad until they all started copying themselves. Cheers!!

Do you have the Various Artist - Whaam Records 1981-84 compilation? I'm looking all over for it. Thanks.

You are the best. I look forward to that and I appreciate the great rarities you share here.

Would you happen to have the Eve Of Destruction single from the Mad Hatters and the Revolving Paint Dream album Off To Heaven or their compilation called Flowers in the Sky? That would complete my Whaam records wish list.