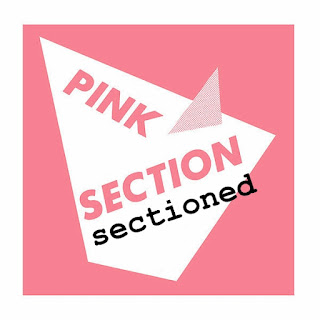 There's something about American culture that just effortlessly produces weirdo's.There's the Dave Grohl type of weirdo who's just so sickenly 'Normal'and Nice that he's ceased to exist;or, there's The Pink section who have ceased to exist because they had created one of the greatest handful of out-rock tunes ever written which are impossible to better...not even by Stevie Wonder!
While other Americans were taking the Devo post-punk route,with the musicianly ability to back it up,The Pink Section had nothing like that in their armoury.They just had something that had to be put before the public,then finish. "Shopping" has to be one of the greatest tunes ever written anywhere in the world?
Having just accidently watched a YouTube video of Dave Grohl listing his ten routes to 'suckess', with my mouth open wide in misunderstanding,telling us to to do 'Bad Ass Rock shows'(whatever that is?) as a certain route to entertainment superstardom;finishing off with him and his sickening group melting into a puddle of slime in a desperate need to be liked in front of a massive stadium crowd,who were lapping it up.Band to audience..."we Looove Yoooou!"
All the advice coming from the third richest drummer on the planet("I did my time stacking supermarket shelves" grins David)....who are the other two richer drummers anyway?.....should all be taken as the opposite route to creative success,retaining a barrel full of self-respect in the process.The Pink Section however did it perfectly,even with a drummer(carl Detweiler) who is likely the third poorest drummer of all time.
Rule number five-ish was 'Be Different'.....er...David????
TRACKLISTING:
1.Tour Of China
2.Shopping
3.Wine World
4.Midsummer New York
5.Flat Dog
6.Part Time
7.Francine's List
8.Safety Instruction
9.Francine's List (live at The Deaf Club 11-3-1979)
10.Jane Blank (live at The Deaf Club 11-3-1979)
11.Been in the Basement 30 Years (live at The Deaf Club 11-3-1979)
12.Lonely Fashionette (Live at Mabhuay Gardens 12-7-1979)
13.Cars Don't Wait For Love(Demo)
14.Jane Blank (Demo)
15.Jane Blank (Cable TV appearence)
16.Shopping (Cable TV appearence)
DOWNLOAD before you go shopping HERE!
Posted by Jonny Zchivago at 10:20

I'd guess Ringo and Lars

A huge list of Cabaret Voltaire just got posted at...

Hope there are titles you want/need.

That's a great way to describe Grohl. Or milk toast. His agreeable social skills helped make him rich, but I don't want to hear it or him. I've never heard of PS, and after watching the video of "Shopping," I found kinship in watching someone try so hard to play drums and failing. Some of us have no musical talent.

Something's wrong with the download-link...

So there is martinf,i'll fix it later today.
Apologies.

Yes, yes, yes, yes. "Shopping" is the greatest ANYTHING ever written.

Dave the ghoul Grohl is a nice guy everyone loves him. Oh okay now I understand never mind.

Phil Collins I think is in there.