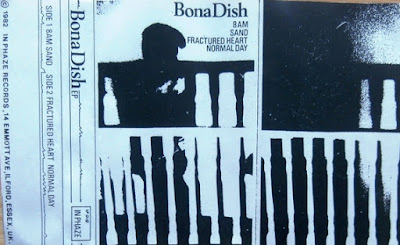 So, we've established that The Shaggs were the first 'Indie' group, Subway Sect Guitars, Beefheartian syncopation, charityshop elegance, twee vocals,and all that the Velvet Underpants contributed were the Sunglasses apparently?
That's until some smart arse finds a group obscure Patagonian herdsmen whom the Shaggs ripped off,both musically and satorially. There's one for every genre,like, apparently, some black dudes from Detroit called, Death, invented Punk Rock as we know it.....just that they only played a couple of empty gigs in 1974 and made some incompetant demo's that accidentaly sounded.... well.... 'punk'? They were just trying to sound like The Stooges, but they were even more incompetant than that lot even. Generally the rule of thumb is that your style of music,especially 'Rock' music, usually gets a name during the lifetime of its originators; anyone before that event is something else.
For me it was either Subway Sect or The TV Personalities wot done the Indie thing first,as much as I wish it was The Shaggs.
Bona Dish were there at its inception, and this cassingle is a rather good example of what creature was swimming about in the Indie primordial soup at the beginning of the 1980's

Don't forget the Sonics and the 13 Floor Elevators.

Was trying to forget about them,but someone brought 'em up.....60's garage Rock/psych.

It appears Mr. Z shuffled the timeline of "first indie group" which he originally established as the late '60s (and the post-Cale VU) to the '80s, in order to award the prize to either Subway Sect or The TV Personalities.

Given this fluidity, I will posit that the first indie artist actually falls between the two. In 1978 to be precise, with the appearance of the album Ready For The House by Mr. Sterling Smith, known to you and me as Jandek. What's more, I am hard pressed to find another artist who has stayed so profoundly steadfast in indie mode--to this very day--as he has.

We can debate if Jandek was the first indie or not. But it's hard not to recognize him as being the purest.

No Ian...i was only joking with VU,and i suspect you were were none too serious when you forwarded The Shaggs as your selection for indie blame.
Its the Subway Sect,followed closely by the TVP's who bares the guilt.
Jandek, may be ideolically pure in his indie ways, but he's more in the tradition of troubled troubador musically, and sartorially suspect.
One thing more is that Jandek is far too real,as were the Shaggs....its debateable as to if either really knew what they were doing....Indie bands always know what they're doing,they'd give their eye teeth to be as outside as Jandek and the Shaggs,who are naturally Anti-Fashion...indie kids make conscious decisions and wear sunglasses.

I can't argue your closing sentence above. That's your second reference to sunglasses, so it's settled.