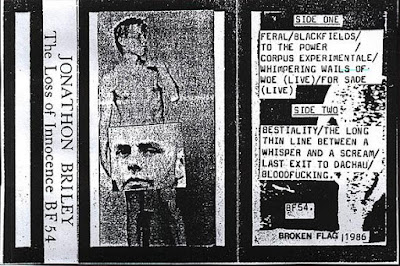 Blimey Guvn'r, Briley got on a proper UK Industrial Noise cassette label too! Broken Flag,as run by Gary Mundy , late of premium power electronic outfits Whitehouse,Sutcliffe Jugend, Ramleh, Kliestwahr etc.
Somehow ,the devils' representative on earth, the 'evil' Jonathan,or the very silly Jonathan, got his work on cassette in the UK,whereas the rest of Sleepchamber didn't.
Ahaaaaa, 'Loss Of Innocence',an occurrance I mourn deeply within myself. I wish I didn't know about Dachau,Bestiality,Bloodfucking,whimpering wails of woe...well...so-called 'evil' in general really.
You may laugh,but I have managed to claw back a modicum of denial within the black whole of experience in my soul, but after watching that Polish War film "Wolyn" the other night,I think I've returned to square one! Bloody Hell Humans are capable of such bestial deeds that I'm beginning to be frightened of my own reflection. I wouldn't call it 'Evil' though, we merely represent the brutal ruthlessness of mother nature,and the will to survive.There's no place for morals in this fruitless struggle just to survive for one second longer than your opponents,or your neighbours.
In Nature, Innocence is just weakness;but being blessed, more accurately Cursed, with some kind of insideous intelligence, we are placed in a position of contradiction between higher being and beast.....and the Beast invariably wins out.
This is basically what Industrial culture bangs on about to the point of cancelling itself out. The music has become nothing more than the background musick to a lifestyle,or a pose,however entertaining. Scrapes,deep fried electronics,and self-immolating effects have replaced mantovani's string sections, and Richard Clayderman's syrupy piano as the muzak of the early 21st century. I, in particular enjoy cooking to the sound of Sutcliffe Jugend's "We Spit On Their Graves" especially. This may be a symptom of my unending search for my Innocence,but it's true.
Even Jonathan Briley has a tribute track to Mellow Jazz Chanteuse Sadé at the end of side one.....or is that 'de' Sadé or 'de Sade',as in the Marquis of?.....I'm sincerely hoping for the former. There IS a place for humour in Industrial culture....isn't there????
Tracklist:

Manboons can only create atrocities and ugliness so don't feel bad.
The glorious utopia will be a third rate Hades with the law of the jungle in full effect.
In the mighty jungle the lion suffers not.

"This is basically what Industrial culture bangs on about to the point of cancelling itself out. The music has become nothing more than the background musick to a lifestyle,or a pose,however entertaining. Scrapes,deep fried electronics,and self-immolating effects have replaced mantovani's string sections, and Richard Clayderman's syrupy piano as the muzak of the early 21st century."

JZ, you scamp! You know (I think/hope) that there is not and never was an "Industrial culture" because there is no "Industrial" music. It's a swindle just like "punk" rock. How can was something that never existed, i.e. "Industrial culture music", become anything. It's you revisionists acting up again, a very trumpian tactic.

"There IS a place for humour in Industrial culture....isn't there????"

If you want humour, and who doesn't, check out Negativland / Smegma / The Residents / Der Plan / Andreas Dorau / Picky Picnic / etc.... Are these artists a part of the co-opted "Industrial" culture? No, because they don't fall into the revisionist categorizations. What are they then? How can they be classified? They don't sound like Metal Machine Music (the "Noise Music" moniker for Whitehouse / Merzbow clones - this is music for the former metal head rockers/punkers that enjoy the extreme hardcore sound) or Portion Control (the "Industrial Music" moniker for artists such as Nitzer Ebb / Front 242 / etc. for the EDM fans that enjoy the extreme/outsider techno sound).

Really can't be arsed to reply to that. Most of that shit is on here somewhere,except Rampton which i had to withdraw cus Bennett wanted it thus.

The diabolical KGB mastermind TrumpHitlerSatan-SS orders me to download this with his mind ray given to him by Pooty Poot Rasputin.
If there is no download my shit ridden Throbbing Gristle buttplug collection will be confiscated and passed out at the great border wall.
Put your mask on for the good of the collective comrade.

Humour in the industrial canon consists of that TG live bit where Genesis says none of the sounds are on tape. It’s the equivalent of the early Beatles interview bit - “How did you find America?” “Turn left at Greenland” - which at the time was considered Wildean wit coming from a pop singer.