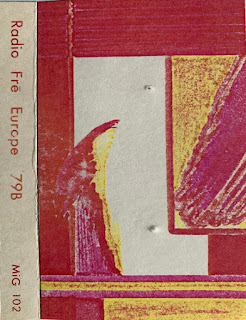 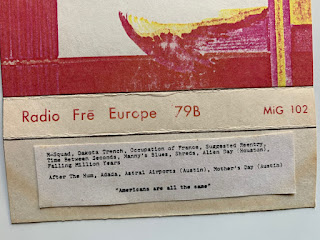 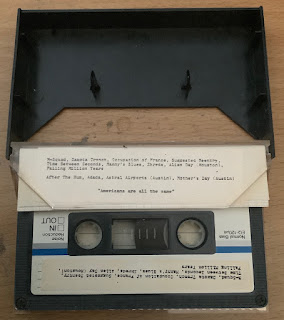 Texas is hardly the most open minded venue for weirdo's, gays, and athiests,no matter how much open space they have. There is one oasis of sanity  however, in Austin,which remains a surprisingly bohemian outpost to this day,even in the Trump Era. No matter how much the local republicans and cowpokes would love to follow Donald's ally Russia's example,and make it legal to throw homosexuals off rooftops, and beat up your wife,as long as the injuries aren't visible; there is a thriving counterculture there that doesn't agree with all that nonsense,and risks serious injury with its non-christian ways.
Another thing that the USA didn't really have much of,is anything that sounded like UK DIY, mainly because of this inate need to 'ROCK OUT'!
Radio Free Europe are likely the only American band that achieved this unlikely feat, and of course, they came from Austin. Like it says on the insert,as a kind of subtitle for this C-45, "Americans Are All The Same"....well apparently they aren't....not much Rocking Out here on offer, and could easily pass for a DIY cassette made by a bedroom band from Preston, Lancashire in 1979. The same goes for American Post-Punk,which seemed to drop the doom which was so prevalent in European Post-Punk, and become almost exclusively a nation of Devo's.....this trait is reassuringly absent from this US DIY cassette classic. Nothing wrong with Devo mind,but do we really need hundreds of them? This need for a herky jerky nerdsville in every US town explains why XTC are an increasingly popular cult stateside....and there's definitely nothing wrong with that either. It's just that American in yer face Henry Rollins syndrome that needs eradicating... pronto......there are no intense shouty man Rollins types in Radio Free Europe, so you can relax......its subtle; a word expunged from Websters Dictionary, as full of spelling mistakes as it is.
Tracklist:

"Americans Are All The Same"
A1 M-Squad
A2 Dakota Trench
A3 Occupation Of French
A4 Suggested Reentry
A5 Time Between Seconds
A6 Manny´s Blues
A7 Shreds
A8 Alien Day (Houston)
A9 Falling Million Years
B1 After The Hum
B2 Adada
B3 Astral Airports (Austin)
B4 Mother´s Day (Austin)
DOWNLOADS are all the same HERE!
Posted by Jonny Zchivago at 12:00

Hi JZ: This is crazy. Just pulled out RFE's "Laughoncue" to give it a spin not an hour before I stumbled on over to DoD? and found this. "79B" is a total mystery item to me-thanks loads, sir!

Texas? Jibba jabba corncob pipe!
Russian haxxors pwn my box and the evil VladRasputin stole my Star Wars sippy cup.
America is the big bad superpower until Russian haxxors get on Fakebook.
Forward! Yes we can.

Indeed. Against all those odds you stated, Jonny, the single greatest song ever recorded came--amazingly--from Tex-ass, San Antonio to be precise. When Butthole Surfers loosed "Moving to Florida" on the world, they proved greatness could emerge from an environment of even the most stiflingly psychotic conservatism. Or because of it. We won.

Wow! I've spent most of my life trying to sound east German!?
but...
"Moving to Florida",is certainly the greatest song ever recorded.Agreed.

wow this is really great, thanks! as far as bhs, surely you've noticed that florida and everything else by them is rawk with a capital R.....for my money "comb" on that ep steals the prize for earth shattering change.........but still rawks!

I had always thought that "To Parter" was universally acknowledged as the best track on that EP--and the closest to prog they ever got. Also, I saw Gibby Haynes at the NY (This Is Not) This Heat show in 2018.

I think it just took a bit longer for the need to rock to die in America. Fer instance, Charalambides started in '90 or '91 in Houston. I've played with dem cats: they only need to rock periodically.

Thought someone made it up, this tape exists, and now I can listen to it (and already a little disappointed, but I own that problem), thanks. First thing I saw when I got into Austin was a southern flag. The wrong southern flag. On a government building. /Magnus.

@Parmalee...who the hell haven't you played with?

I guess, that the longer one considers a record,ones preference can alter from the track that really is the best on the record.....first listens are never wrong on that count.

@ Kevin..the BHS had their non-Rawk moments in the early days....as for later on, i never heard anything else after that 'Hairway To Steven' record,which I didn't like one bit....in England BHS stands for British Home Stores,which has now gone into liqudation....a bit like the american BHS. LETS RAWK!

"Who the hell haven't you played with?" This has long been a source of wonder and amusement for a lot of people I know. Comparable to the fact that I have somehow successfully hitchhiked with a bicycle, a dog and a bike trailer (for dog and gear) en tow. Or that I can walk around airports while smoking a cigarette and accompanied by unleashed dogs without being stopped by anyone. If you act sufficiently naturally, people tend to overlook the totally incongruous. Sadly, I think that's my only real "talent."

But at least I never morphed into an "alternative rock" band like the Butthole Surfers.

This (RFE), on the other hand, is great--(so far) it's sounding a bit like Dead C crossed with Swell Maps or something.

Alternative Rock, usually means just 'Rock' as far as I can see?
An Alternative to 'Rock' is more like the proper meaning of the phrase.

This always gave me a Red Krayola vibe... they weren't located too far apart.