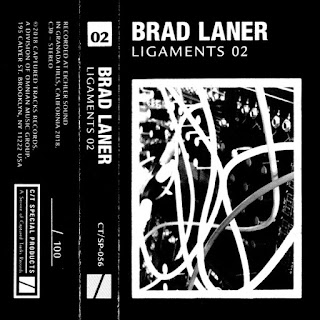 Another rewiring of the ligaments in the ligature of a genre that could be, 'Modular Synthesis".
Personally the sight of wires gives me a migraine,and the cost of this new generation of Modular synths makes me wince. But, at least we have Brad Laner to do it for us.A better candidate to make sense out of this rich retiree's 21st century version of collecting butterfly's I cannot think of.
This second tape is at least far better,and nuttier, than tape one,which was in turn far better than most indulgers in this questionable pastime........and yes, the covers do look like those Industrial Records cassettes.....a tribute within a tribute?
Tracklist:

A Ligaments 02a
B Ligaments 02b
DOWNLOAD some new ligaments HERE!
Posted by Jonny Zchivago at 14:28

He gets excited, you get excited too.

No points for who I'm listening to tonight.