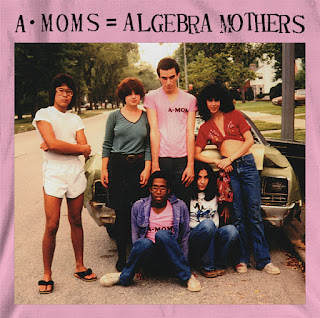 From the Rock City of Detroit came a bunch of misfits called 'A-Moms',who released a quirky single(get it HERE!) and promptly disappeared....ahhh, but did they? Hence this post-humous compilation cobbled together, minus the single, for Third Man Records a few years ago.
They played all over the massive cosmos,or barren wasteland, that is Detroit, supporting every offshoot of the Stooges or MC5, and Pere Ubu.
Obviously talented musicians, they do have a tendancy to all play at the same time,which 'talented' muscians have an unstoppable drive to do.This is when we need producers to tell 'em what to do.
There is the odd bit of Hendrix-y fretboard wankery,but we can forgive that,for this charming delve into the Archives of another group whose abysmal name probably cost them a larger audience....which is either a good thing or a bad thing depending on how you look at it.Personally, I prefer the groups who do their thing then FUCK OFF. A-Moms certainly did their thing,then Fucked Off,so they're at least one up on U2,who didn't.
Tracklist:

1.Carsick
2.In and Out of Order
3.Seesaw
4.Little Mathematica
5.Goo Goo Eyes
6.Ironhead
7.Misfits
8.Nuns in Chains
9.As The World Turns
10.Dance Damage
11.Hollywood
12.Chemical Tastes
13.No For An Answer
14.Swan Song
DOWNLOAD the A-moms of invention HERE!
Posted by Jonny Zchivago at 17:39

Wait a sec...the dude on the left IS my mother!

The tall one in the middle is my mum!!

Hold on there buddy boy...if that tall one is your mummy,then we are brother and sister,not ncessarily in that order.