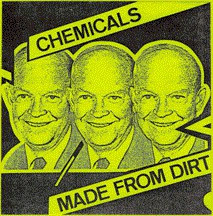 More hopelessly obscure US Post-Punk quirkiness,or as it is described on the sleeve as "World Class Art-Wave"? A genre within a genre. Just trying to think of other Art-Wave acts who were never referred to as, but were Post-Punk......Talking Heads?...Wire?......things are getting far too complex nowadays! How does an Art-Waver know if he's an Art-Waver or Post Punk?
It used to be far simpler back in the day.....all this was 'punk'.....not even Art-Punk...it was Punk.Heavy Metal was Heavy Metal.There's slow Heavy Metal (Sludge,Funeral,Doom +another 600 varieties), Fast Heavy Metal, (Thrash,Speed,Punk Crossover), Classic Heavy Metal (Judas Priest, Black Sabbath,NWOBHM)...and that's it!
Chemicals Made From Dirt, was a .......they're at it again on these sleevenotes!....a PunkWave.....what the fuck is that?.....Punk?.....from Long Island. So at least they were near the action,rather than some cesspit in Iowa or one of those more medeval states that seemed shut off from the world since the witch trials.
Again we have a group with a name that suggested immediate commercial failure.
At the risk of starting another genre, i'll describe this as that quirky variety of post-Punk which became popular among geeks wanting to form bands in the USA between 1979 and and 1983, approximately between Devo's first album and "Oh No It's Devo".......or Oh No! It's another Quirky Post Punk Band.
Alas, whereas Devo had a compact and memorable name, Chemicals made from Dirt (CMFD....even the acronym is a tongue twister!) had a difficult to remember moniker,if not forgettable.
Me, being a Fan of Quirky Post Punk, or Art Wave, Or art rock in general,beginning with XTC,who were the British Devo/Talking Heads.A face that launched a few post punk novelty acts like The Vapors,but not a wave of the likeminded as in the states.
CMFD left us with 25 songs recorded for posterity back in the day, and put on a disintegrating CD-r by Chuck Warner of Hyped2Death at the turn of the century, and they're all good. Personal fave is "Beatniks Looking For Tourists",'cus I like anything with the word 'Beatnik' in the title.....I'm that deep, that 'arty'.
Let a band spokesman finish off this confused narrative with something sensible:
"We called it an avant absurd experiment...We liked the idea of breaking down meaning to the point of abstraction and then reinterpreting it based on personal associations and meaning rather than having any absolute meaning.".....yep...Artwave alright!
Tracklist:

"Avant absurd experiment" they say?! That band quote above reminds me of something I might read in the self-penned liner notes of the greatest 7-inches I have ever fondled in my supple hands, the Genius EP released in 1981 by The Philosophic Collage: a peerless bass, drum, moog, harmonica retardo art-rock trio from Missouri: https://www.discogs.com/The-Philosophic-Collage-Genius/release/4011171.

Spasmodic art-damaged music from planet Moron featuring herky-jerky bass lines, odd time signatures with syncopated "punk-jazz" drumming (yes another annoying term I'm throwing in for you), whacked out-of-key harmonica, and out-of-control moogs bleeping, blipping, blurping and squealing at you from both sides while the singer sarcastically mocks you with the most ridiculous lyrics ever written in his whining nasally voice oscillating up and down and up and down and ... well, you begin to get the picture. Pure "Genius" (get it, cause that's the release title). I've got "it" if you want it.

Sounds like my bag Mr David.You know me too good!

Ok, here it is; unfortunately this is my vinyl rip from 2001 or so and it ain't super great but good enough -- there's also a BDR re-release from 2012 if you can find it. The scans here are from the re-release I found online.

If you like it I hope you will give it proper presentation so it doesn't languish in this very lonely comment thread.

Dave, I have perused...It Good....It Very Good.....should annoy both Punks and Parents alike.This is a recommendation to all.
Will post it to up its exposure to both the punx and parents who haven't been annoyed by it yet.

Is it good bad or indifferent? Asks a cmfd member. What amuses me is that ur writing about it 40 years after the fact. I used to feel ashamed but as the deconstructionists say embrace stupidity. Doug Milman

Not THEE Doug milman issit?
We are not worthy!
Stupidity must always be embraced,especially willful stupidity
You should be proud.
Real intelectuals embrace their inner moron.
40 years is but a mere blip on the the journey to immortality.