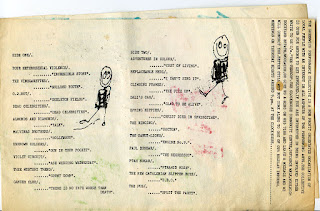 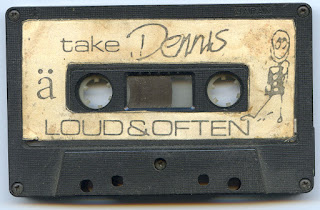 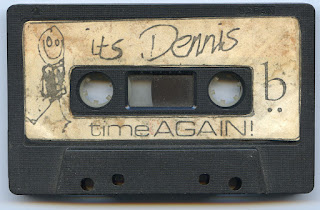 Balancing carefully on the zero degrees longitude meridian ,and therefore at the center of the Earth, The Greenwich Performance Collective were also balancing on the watershed point of the 80's,at the point when the Proles started to get into vintage clothes and buy hit Cardiacs singles....like Punk never happened.Worse was to come with surreal visions of white factory fodder dancing to electronic music and getting Psychedelic. Not that I can imagine 'Your Heterosexual Violence' from the Greenwich Performance Collective (the GPC) ever shaking a tambourine to the funky drummer beat.
This collective compilation is Indie/DIY crossover at its zenith before the unwashed masses heard that the Roland TB303 bassline wasn't a piece of shit after all, oh the purity.
One does suspect that a lot of these marvellously named groups on 'Dennis' contain the same members,but its rather better disguised than some of Jim Whelton's attempts at faux-compilations,like the otherwise excellent, "Psst!Wanna Buy A Tape"
The best part about making music is always making up band names.It's ALL downhill from there.Whether you're in 'The New Catalonian Slipper Boys','The Dandy Lions','Dead Celebrities','0.2.WOT',it's all going the same way. If only Boy George was in 'Cancer Club' and not the sickening concept that we're all in this together and getting on with each other that suggests the name of his own group, then we probably wouldn't hate the fucker's guts anymore....there would have always been the name to raise a smile instead of a small bit of vomit into the buccal cavity.
Basically,my adice to any youngsters who wanna rediscover indie pop,just find a name that makes you laugh,then just keep it at that,forget the music part.
Who wouldn't want to be in a group called 'Your Heterosexual Violence' for chrissakes? An added bonus is that musically they sound like a more incompetant Nightingales.
I also like the fact that there's a group called 'Dali's Car'at exactly the same time of that Neu Romantic/Goth supergroup pairing of Mick Karn and Peter Murphy...also called 'Dali's Car'....unless they are the same entity,in which case mucho respect to Karn and Murphy.Personally I like both of Dali's cars.I also like Dali's moustache,a version of which I now proudly sport on my upper lip.
It's not just DIY and Indie punk on this fantastic cassette, there's stuff for the intellectuals and european music fans,some cosmic and minimal synth stuff,so,sadly, it's not totally offensive to the average music bore.There's also some disco for dancing, and even some white boy Rap.....you may never need another tape?
Tracklist:

A1 –Your Heterosexual Violence - Incredible Story
A2 –The Vinegarettes - Guilded Youth
A3 –0.2.WOT - Skeleton Fields
A4 –Dead Celebrities - Dead Celebrities
A5 –Almonds And Diamonds - Talk
A6 –Malvinas Brothers - Hollywood
A7 –Unknown Colours - Gun In Your Pocket
A8 –Violet Circuit - Ash Wedding Wednesday
A9 –Thee Mystery Trend - Count Down
A10 –Cancer Club - There Is No Fate Worse Than Death
B1 –Adventures In Colour - Cost Of Living
B2 –Replaceable Hedz - I Can't Sing It
B3 –Climbing Frames - The Pick Up
B4 –Dalis Car - Glad To Be Alive
B5 –Spring Hippies - Christ Died In Springtime
B6 –The Ringing - Doctor
B7 –The Dandy-Lions - Engine No.9
B8 –Paul Dunbar - The Regressus
B9 –Ptah Sokar - Pyramid Rise
B10 –The New Catalonian Slipper Boys - B.B.C.
B11 –The Pus - Split The Party
DOWNLOAD a tape called dennis HERE!
Posted by Jonny Zchivago at 17:49

Absolutely flippin' GREAT! I didn't even know this existed.

Too flippin' right it is.....there's another GPC tape comin' up next!

Punk was just the kick in the pants that music needed as it was all boring radio wank at that time.
Ronny Jotten is entitled to his political opinions and filthy lucre and what made punk great is still great.
DIY the musicial equivalent of Mr. Fixit.

And GPC is flippin' great indeed!

Dali was a cunt. Makes sense. He once bit his nurse. Never bite your nurse. She can easily put you down. He used to shit himself just after being changed. Which is kind of gansta but still pretty damn evil. Unless he got off on it sexually then it's okay I guess. Hard call though. I hate him myself for being so obnoxiously funny. Poor Joseph Cornell though. Dali was a bully. But he did it with style. Sometimes. Scat!

About the post I am excited to listen to it. So I will go do that. Later guy.