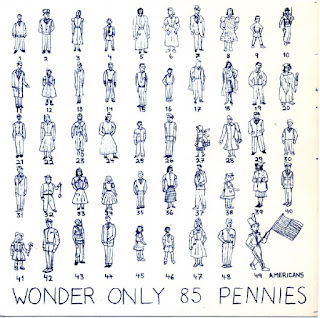 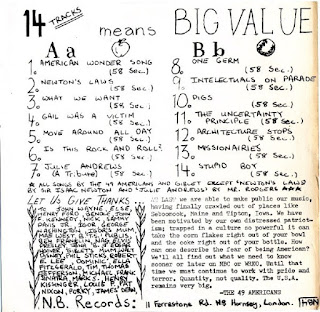 Radio Free Europe may have asserted that 'All Americans Are The Same', but there were at least 49 of their compatriots who were certainly NOT the same......mainly because 48 of them were made of pasty faced English wimps,the types who'd get sand kicked in their collective faces by those real American boys who all look like Henry Rollins, while berating them as a bunch of Fags. Which of course, in England-land is a packet of Cigarettes,or ciggies. 'Fag' was also a Public School term,used by the sixth form,for their 1st year servant boy,who would invariably end up being abused violently and sexually by their adolescent masters. ...."Come here Blenkensopp,I'm going to give you a damn good bumming,you snivelling little Turd!"
This is what the British Empire was built on,alongside Tea, and a leaky raft of 'Good Intentions';and we all know the road to hell is paved with these good intentions"(C.S.Lewis)...don't we?
A deadly accurate portrayal of British Public school life can be viewed here,Episode 1 of "Ripping Yarns"...."Tompkinson's School Days"
Using Rape as a weapon is the time honoured way of creating generation after generation of traumatized and suggestable future leaders.Most of the British Govenment have been through it....I mean just look at Boris Johnson!?......its a system that seems to work,keeping everything just fucked up enough to function, yet dangle a distant unattainable carrot of hope to aspire to,dangling on the far side of the pit of dispair. I'd love to know for whom Johnson fagged for at Eton,he does,after all come from 'New Money',so he probably got an extra special bumming in the 'Boot Room' at Eaton.
You Americans don't know how good you've got it....yep, it's that bad!
The 49 Americans were recruited from the J-Arthur ranks of the London Musicians Collective by the sole American in the group, ex-pat Andrew "Giblet" Brenner.This included such improv luminaries as David Toop, Steve Beresford, Max Eastley, Lol Coxhill and Peter Cusack, as well as Nag and Bendle of The Door And The Window ,Vivien Goldman and 'Slit' Viv Albertine (I somehow doubt that her time with 49 Americans will make it into the proposed cinema biopic of her life).
This amateurish, no-fi, non-pop...er...pop(?), is about as far as one can get from a standard rollicking,rocking,or Rawking, American Group as you can get.All that for 85 new-pence,with each mini-symphony lasting 58 seconds, which is a numerical palindrome of 85.Those krazzee kidz!
Tracklist:

So this was before The Residents Commercial Album, released Oct 1980? They were only 2 degrees of separation from many of these guys. Also, really, commercials were mostly 30 or 20 sec by that time. 60 sec of airtime is too costly. Also attention spans are...big fan of Ripping Yarns. I really love the one about the boring guy who loves shovels and the football fan one. Truth.

to be fair to dipshit rollins, at the time of those tours, and those first 2 lps, black flag were truly terrifying live. Nothing like that had happened since jerry lee lewis or the stooges... The lps even seemed scary at the time. Those of us who were involved that long ago, lost interest in him when he cut is hair and donned gym shorts, and turned into a PE teacher. He became an absolute embarrassment when his first idiotic book came out...roughly around the same time as Cave's "and the ass wrote a book"....but they both certainly have given me the shits since.........

Its his un-nerving enthusiasm that scares the shit out of me!
At least Cave is pretentious and a miserable fucker....i'm comfortable with those two qualities in a Twat.

I loved when Bevis and Butthead caught a Rollins video on their TV
and started screaming, "Change it! t's that guy from the Rockford Files..."