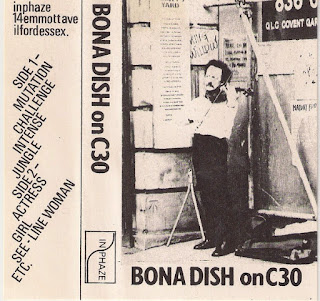 As discussed on the previous post, what was and what wasn't 'Post-Punk';putting my revisionists hat on again, one came to the conclusion that there wasn't any Post Punk until it got a name.
This third Velvet Underground album inspired 'Post-Punk' cassette, on the legendary 'In-Phaze' DIY label, could have a claim to be the first 'Indie' band on record? It could have been titled Bona Dish on C86 if only they had a pop music crystal ball and saw the near future.
The acronym 'C86' itself conjures images of twee light weight pop,with a Velvet Underground leaning, but that actual cassette was full of the more spikey end of the independent music scene in the UK at the time.....I mean, Bogshed were on it for Lou Reed's sake!?Again betraying another fake scene as invented by the British music press,still desperate for another Punk Rock.
Who were the first Indie band then?....Well obviously it was the post-cale Velvets, a 'Proto-Indie' band if ever there was one;but, compared to the UK Indie sound they were virtually Heavy Metal when put alongside stuff like Bona Dish. Clean Guitars, Beta-male rhythm section,twee girly singers, fringes, apathetic and proud. Was Indie nothing more than well-played UK DIY,or post-punk with a rosy outlook?....the answer may well lie on this C-30.

A1 Mutation
A2 Challenge
A3 Intense
A4 Jungle
B1 Actress
B2 Girl
B3 See - Line Woman
Β4 Etc.
DOWNLOAD a dishy boner HERE!
Posted by Jonny Zchivago at 10:35

Hmmm...wouldn't The Shaggs be the first indie band then, Jonny? Their first 7" was released in 1968, while Mr. Cale was still a member of the VU.