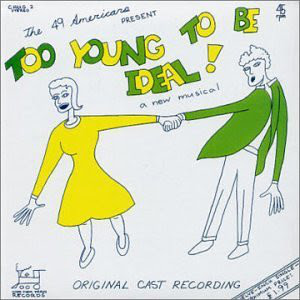 Blimey! In the space of less than a year the next 49 Americans EP cost a whole One Pound and fourteen new pence more than the first one. Now's thats galloping inflation on a Zimbabwean scale!?
And what do you get for your extra expenditure?
A lousy extra six minutes of The 49 Americans in action!
The cover states that this is a Twelve-Inch Single......so its the extra five inches of plastic that gets the blame for the increase in entry fees is it? And I thought these guys were a bunch of communists?
Can't trust anyone these days,even back in the 1980's it seems?
Well before Facebook and post-truth we had Post-Punk.So if we applied the same criteria as applied to alternative facts, that means that Post-Punk is actually Punk that wasn't Punk......it's all so clear to me now.At the time I thught all Punk was Punk,and that, there being a time when the term Post-Punk had yet to be coined,I thought stuff like Gang Of Four, The Pop Group,and Wire were actually 'Punk'.Then some bright spark Journalist,either Jon Savage or Paul Morely, came up with this pigeon hole around 1980-ish,meaning bands who didn't sound like The Ramones or look like The UK Subs;when before the term used to mean everything after 1976.
The first genuinely Post-Punk bands were stuff like Siouxsie and The Banshees,Wire,and PiL;but bizarrely there were Post-Punk bands before Punk too,like Pere Ubu,and Talking Heads...proto-post-punk anyone?
This is the true spirit of Punk Wok, moving forward,striving to be an individual,and not being a UK Sub doing 'Stranglehold' for the upteenth time in your seventies.
Punk Wok is The 49 Americans,doing it yourself,and not copying the Womones and the Thex Pithtols, that's....Wunk Pock.....as in the last post I used a 'Palindrome'event,now is the chance for me to use a Spoonerism.....and I'll do it again,watch....Wunk Pock. Ta Daaah!
I'm too old to be an Idealist!
Tracklist:

A1 Theme
A2 Woe Ballad
A3 Yucky Nightclub Job
A4 Love At First Sight
A5 Don't Sing The Blues
B1 I'll Make You A Star
B2 Love Has Solved My Problems
B3 Successful Wonder Glory / Success Turns Sour
B4 Big Decision
B5 Should Be More Ideal
DOWNLOAD the lost ideals of youth HERE!

hahaha How can I top that - J Arthur Wank indeed. I'm gonna go all earnest and say think that may be the most on-the-nail elucidation of this thing called post-punk I've possibly ever read. The application of criteria bit was especially resonant. I suspect you may have been drinking when you typed it, which makes it even better.

How dare you!...i never indulge or condone the use of stimulants of any kind in the creation of this blog.
I was merely tasting the contents of two cans of a famous brand of belgian beer...and I can report back,they tasted gooood.