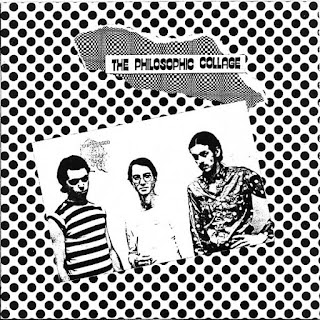 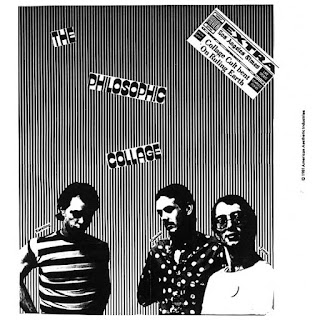 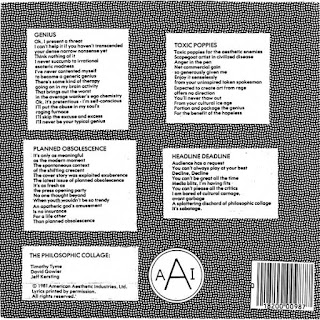 Angry geeks want to show us jocks how much cleverer than us they really are,and 'look at me now' revenge has been taken...if only the jocks knew about it,which of course they don't...Jocks don't like music,only music for people who don't like music...like Bon Jovi, Nirvana,Techno, Ed Sheeran etc.
The EP title, "Genius", is by no means "Ironic"....in inverted comma's not quotation marks...they actually believe they are bona fide Geniuses,which is the collective noun for genius. I wager the geekier one on the cover thinks that he's the real genius of the group,and the others are just his post-punk servants.
The music is like a cross between Half-Japanese,the ultimate American Geek's Revenge band , and The Diagram Brothers,the ultimate English Geek's Revenge band, except that the singer,slash, Jad Fair impressionist, seems to be recorded from a radio in another room. In the main room they have modern recording equipment to capture the barely falling apart abstract rock in hi-fidelity to annoy both punx and parent alike.Punk is Jock music and parents either want their geeky son to either be good at Football,or a Doctor. Parents are people who never understood the truth that is revealed to humans during their teenage years, and if they did, they forget that 18 years olds really do know everything that needs to be known.
If an angry Geek ever gets into power again....the last one that got in in the west,without winning the popular vote, nearly destroyed the planet (A.Hitler)....they may use the most terrifying Geek tool of all to force us all into death camps,otherwise known as,Facebook.Luckily we have the Donald,who is genuinely too stupid to impose this grim future upon us all...as is Biden by the way,so we're safe for the next couple of years before Biden inevitably dies,and that dodgy vice-president nominee,Ms angry female just enough milk in her coffee geek, gets into office.Nothing will save us then.
Sorry for interferring in American politics, but Putin has video of me at a Bunga Bunga party!!
It was nice knowing y'all.
Tracklist:

A1 Genius
A2 Planned Obsolescence
B1 Toxic Poppies
B2 Headline Deadline
DOWNLOAD this genius HERE!
Posted by Jonny Zchivago at 11:39

Speaking of Facebook.... I got banned for a whole month two days ago because three months ago I posted a youtube video from a song by Skrewdriver, Anti Social from their excellent first album, which, as you know, has nothing to do with what they, well, the singer and some other guys, became later.... Ah well....

And you're spot on about Ms angry female just enough milk in her coffee geek,if that one gets into the White House, I shudder just thinking about it.....

Indeed Henk, Skrewdriver are up there with Ultravox as albums that get ill informed comments. Having spotted a white vinyl version of Ultravox's "Systems Of Romance" for ten euro's the other day in a near empty ghost-town of a city centre, the inevitable piss taking occured about Midge Ure!Of course nowadays they don't supply plastic bags to hide it in...So the tiring ritual of explaining the difference between the John Foxx Ultravox, and The Midge Ure Ultravox proceeded.to minor irritation on my part.
Skrewdriver Mk 1 has,of course, a more dangerous connotation about ones politics,implying that one is racist and a nazi.....mud sticks no matter how much enlightening explantions one offers to the ignorant.
However I think I'd sooner be called a Racist than a Midge Ure fan anyday of the week!....thats a joke kids in case i get some come back from the self righteous subscribers to this blog....if they haven't all unfollowed me by now.

they forget that 18 years olds really do know everything that needs to be known. It's true