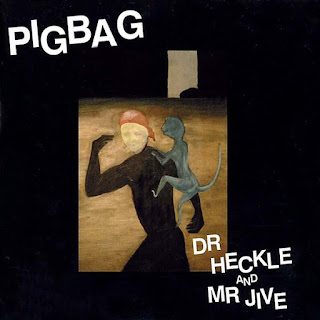 This blog of late has been getting into some pretty unhealthy, populist, 'Dance' orientated areas!.....I blame that bloody bunch of hippity-doodie commies 'The Pop Group'; especially as all their members seemed to crop up somewhere in all these groups.....Pigbag being no exception; as original bassist, Simon Underwood was to be seen doing that dancing with the bass thing, that all white boys felt obliged to indulge in from the Ska boom onwards.......YOU WILL ENJOY YORSELF!
One thing I can't stand is enforced jollity.
Mr Underwood also holds the undisputed honour of being the only member of The Pop Group to ever be on a Hit record..... "Papa's Got a Brand New Pigbag", thanks to Mr Paul 'N-n-n-n-n-Nineteen' Hardcastle's punchy remix (included here); and they also got to do Top Of The Pops twice!
Saving street cred stories were later heard about how naughty they were in the BBC studio's, making the director very very angry.......Oh those anti-capitalist Anarcho-socialists eh!?......just a pity that their need for success ran roughshod over their 'principles'.......but at least they could prance around on telly with their trumpets I suppose.
That said, they made a couple of well funky brass heavy tunes that can even get my Anti-Capitalist Anarcho-socialist toes-a-tapping.

thanks for this - despite your sarcasm! If you like post-punk-funk then check out Pinski Zoo's Introduce Me to the Doctor album from around the same time. I'm pretty sure i remember a mad evening at the Lyceum with James Blood Ulmer, Pinski Zoo, Pigbag and possible Rip, Rig & Panic [or was it The Higsons? or was The Venue the venue? i dunno, googling has only confused matters] all playing. They built a scaffolding percussion page centre stage which all the drummer/percussionists used throughout the evening.

We have to deal with Jonny's sarcasm and witty comments - he's owner at this place and he's part of the old system boss/underdog... or isn't he...?!? :)

@Anonymous:
Sounds like an interesting night. Though I'd have split after Ulmer's set.

I don't really have anything either interesting or sarcastic to say,except i'm liking the comments so far.