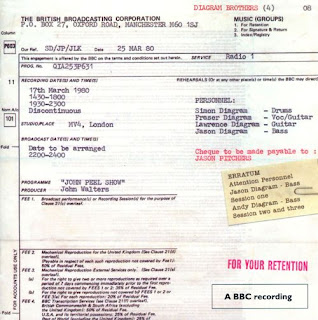 Post Prog genii, The Diagram Brothers, show us that shifting tempo's, unusual time signatures, can combine within the short song format, and still include humour ,funk and punk.
Bill Bruford and his proggy chums from 'Yes' would struggle to cope with the disciplines required to play these tunes.The difference between 'Yes' and The Diagram Brothers being that 'Yes' are utter shite, and the DB's are very good.
These sessions include the best versions of DB's classics such as 'Bricks', 'We Are All Animals' and 'Postal Bargains', among a plethora of similarly skewed and abstract Prog-punk classics.
They called it a day in 1983, understandably, because it was almost impossible to progress from here, other than endlessly repeating oneself, which is what a lot of groups tend to do.
The Diagram did the noble thing and packed it all in once they had got this stuff out there. Similar bands, like The Cardiacs and XTC carried on in the same vane; except XTC did manage to devolve into a pastoral post-psychedelic song factory until they burnt out, and The Cardiacs eventually had to stop because of serious Illness's.There seems to be a physical barrier to prevent this type of progressive pop from going further,rather like the finite limit of the speed of light?

DOWNLOAD some interesting diagrams HERE!
Posted by Jonny Zchivago at 09:56

Ah the marvellous Diagrams bring back fond memories. I can only hope more to come e.g. their sole album. Keep up the good work Jonny

This is incredible--being consistently discordant AND keeping it interesting is an impressive feat! In a strange way, it's almost like the exact antithesis of mid-80's Robert Wyatt, yet both are somehow great.

Incidentally, don't know if you were actually thinking this, but the drummer tunes his drums like Bruford and kinda sounds like him.

Never really studied Bruford in Yes....but for King Crimson mark 2, i do see the similarity.He did well transferring to a far superior prog outfit.