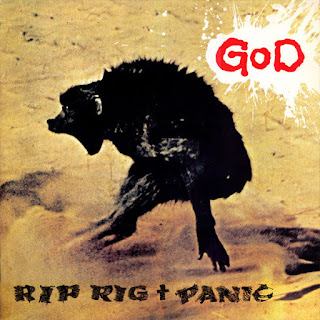 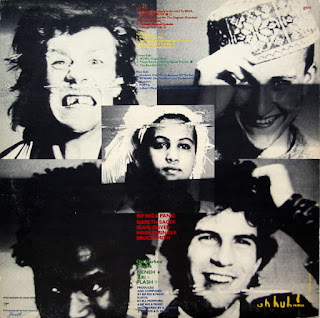 The Pop Group splintered into many pieces, none greater than the whole.
The very trendy Rip Rig And Panic(Jazzy namedrop number 1;nicked from Roland Kirk), featured Sager and Smith from the aforementioned Pop Group, plus keyboard hanger on Mark Springer, and future International Pop Star Neneh Cherry.
Thinking they were getting a poppier version of The Pop Group, Virgin Records signed them as quick as shit off a stick.......someone must have got the sack after Richard Branson heard this.
It does,however, sound like a bunch of pretentious ,and very recent Jazz Record fans shut in a room with instruments, a tape recorder, and some Tequila ,and told how fantastic they were.
The ,admittedly, lovely Neneh Cherry's whiney voice being particularly rasping on the delicate bones of the inner ear.
Whenever 'Jazz' becomes absorbed into Pop music, there is always a sense of annoying elitism treading water within the 'we are cooler than you' grooves. Someone bought some of those marked down Archie Shepp records from the eclectic record shop in downtown Bristol to leave lying around their squat........what music do you like?.........Moi?...I like Jaaaaaaazzzzzz, y'dig?
Oh...OK......I 'dig' Jazz too, but i'm not so far up my own arse as to not realise I feel slightly more sophisticated when i'm playing an Albert Ayler album than one by A Flock of Seagulls.......I know which one i'd prefer to be listening to most of the time......that's right, A Flock Of Seagulls, Ayler gets right on my tits. Neneh's dad, Don Cherry, happens to have made some rather great fusion records, and even appears on Rip Rig + Panic's second LP.
I'm a big fan of the epoch when Jazz embraced rock, the Fusion era of Miles Davis,which was an evolution  rather than when Rock embraced Jazz, or worse, when 'Pop' embraced Jazz, which was motivated by a lack of idea's;so they steal from the past rather than look towards a future.
I hated this record when I bought it.....but as so often happens after a gap of thirty years it sounds fresh, wild and exciting.......now I thinks its very great(despite the fucking annoying people on spliff humour). I'm so fickle ain't I?


DOWNLOAD this rip and don't panic HERE!
Posted by Jonny Zchivago at 10:25

Nah.
This is genius

Aye agreed its the Nuts man,Walking around the beaches in Hartlepool listening to "GOD"love these EPs.......🐒