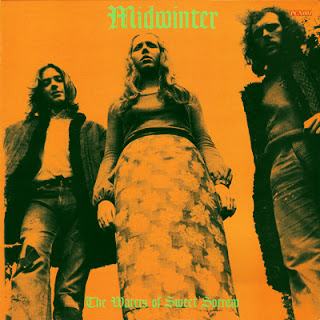 By 1973 every urban street had a Progressive Folk Band with a lady singer of questionable ability singing about country life,while the blokes squabbled over who was gonna be the Bert Jansch of the group.
Alas, also by 1973 the kids were turning a blind ear to these urban folkies and went in a very ill advised ELP direction. So it was unlikely you were gonna get your album released by Island or any other previously Folk orientated label. So your tapes were stored on the shelf until the crate diggers of the nineties 'rediscovered' your rejected efforts,and burnt it to CD for the Japanese market.
Midwinter were one of these doomed ,too late for the wave, kind of things, which rose up from deepest darkest Great Yarmouth; a grim seaside town, that had less than nothing happening during the Winter season...except for the Folk Club,where our anti-heroes met up.......during the bleak Midwinter of 1972.
The tapes were indeed found in guitarist Ken's Attic, and now they enjoy the cult status that was denied them when it was most needed.Better late than never I guess?
Impressively this is quite good indeed,despite yet another version of "Scarborough Fair". Jill Child's singing comes from a Jacqui McShee via Shirley Collins direction,but,of course lacking either of their charisma's or talent, .Lets face it you ain't gonna find a Sandy Denny living down your street in Great Yarmouth are you?....Probably in the eighties if she fell on hard times maybe, but we'll never know......so Jill Child it is.However, her simple understatedness suits the music much more authentically than any of those Female Folk legendesses.
Tracklist:

1.Sanctuary Stone
2.To Find A Reason
3.The Skater
4.Scaborough Fair
5.The Oak Tree Grove
6.Dirge
7.Maids And Gentlemen
8.The Waters Of Sweet Sorrow
9.All Things Are Quite Silent
10.The Two Sisters
11. Winter Song
DOWNLOAD the midwinter of discontent HERE!
Posted by Jonny Zchivago at 12:18

Great Yarmouth...the most humour free place I ever visited in the 80's, can't imagine things have taken a turn for the better since then what with Brexit and all that...(not too) interesting aside..no nothing..sorry for giving false hope.

"by 1973 the kids were turning a blind ear to these urban folkies and went in a very ill advised ELP direction. So it was unlikely you were gonna get your album released by Island or any other previously Folk orientated label. So your tapes were stored on the shelf until the crate diggers of the nineties 'rediscovered' your rejected efforts,and burnt it to CD for the Japanese market."

Yes, that's the flow. What's the next step after Bandcamp?

@northfield....well i'm thinking of starting a new site called "Bannedcamp" which only allows exremely offensive,insulting, and downright rude material ONLY!...anyone calling themselves either 'Punk' or 'Harsh Noise' will be denied access with a strict No Boring Fuckers policy.

@softshoebanana.......yeah Yarmouth and east anglia in general was Brexit central? I think that sums the place up nicely.....except for Midwinter of course who were obviously englightened types....Never Go to Yarmouth.