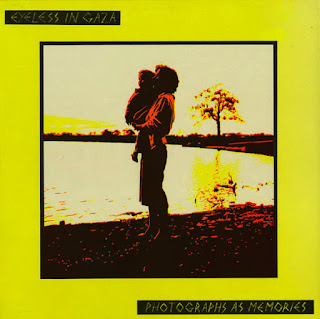 What a great album?
I vividly remember spending my £3.99 one school lunchtime on this after reading a Review in Sounds. I thought it was by Dave McCollough,but no, it was Des Moines, the compiler of 'Hicks From The Sticks".....and guess what...here it is:

"This record celebrates the first anniversary of Nuneaton duo Eyeless In Gaza and simultaneously plugs another hole in the Coventry Nuneaton jigsaw already graced by the Reluctant Stereotypes, The Urge and semi-cult figures Pete Bosworth and Kevin Harrison.
Recorded and mixed very cheaply in 24 hours last July, the disc has a decidedly ‘live’ feel to it, a feel which guarantees plenty of atmosphere while taking its toll in terms of bum notes, fluffed timing (cock an ear to Bates beserkly-strummed guitar on ‘Knives Replace Air’) and recurrent instrumental indecisiveness. But that’s the price you pay for being committed to first takes and minimal overdubbing usually only one synthesiser overdub per track. The entire trip is excruciatingly intense, speculative and aggressive, and almost totally devoid of discernible influences.
American jazz-funk, Big Youth and Robert Wyatt are all professed heroes of Becker and Bates, but you hear as little of them as you do of anyone except Eyeless throughout this stupendously self-assured long-playing record.
There are a lot of flaws. Former R Stereotypes song-smith Bates has an extremely challenging voice but doesn’t vary it half as much as he needs to, and sometimes affects it so contrivedly it takes the form of unlistenable asinine rantings or else projects like an unsuccessful Louis Armstrong impression.
Usually, though, it’s just so for futurism par excellence. ‘From A to B’, ‘Speech Rapid Fire’ and ‘No Noise’ are three representations of how Becker (£200 Wasp synthesiser, voice, percussion, violin, stylophone, ‘treated tapes’) and Bates (voice, electric guitar, plastic organ, soprano sax) at full flow achieve their thoroughly magic melodies. Their formula isn’t easy to unravel. Becker’s uncanny flair for compelling succinct synthesiser hook lines is the conspicuous characteristic, but Bates’ imperiously evocative vocal is a factor just as crucial.
‘John of Patmos’, with a vocal line superficially reminiscent of ‘White Man In Hammersmith Palais’ and featuring Bates’ cliché crazy sax, is one that botches its pretension to ‘avoid entropy’, disintegrating into time-wasting chaos and representing Eyeless at their worst. ‘In Your Painting’ is similar rubbish, the musical equivalent of cycling over a canvas full of oil paints and calling the result ‘art’. Listen out for both of them nonetheless we rolled about when we heard them, they’re so ridiculous. They made us feel so conservative!
Sad that ‘Kodak Ghosts Run Amok’, the indie EP of ’80, didn’t join the other ‘Photographs As Memories’, a victim of the frequently misguided ‘no duplication-of-material’ stance favoured by your average left-field combo. But the highspots of the album are truly staggering, and it’ll be interesting to witness the band break cover from the false security of policy statements (‘It’s important to us that our music intuitive … we make music from pure feeling as opposed to analytical and methodical considerations‘ etc etc) get up there on a podium, take risks and sing for their suppers. Sing, in fact, lyrics like ‘Scratch at peeling veneer, worn unpolished. Carve more lines and refuse to acknowledge Praise up your figure. The Indian giver. As if it’s seven years bad luck just to look in the mirror’. (‘Seven Years ’)."

Yeah, I'll concur with that, saves me writing anything much anyway.
Just that it sounds better today than when i first played it.
Its hard to believe Martyn Bates was in the truly awful ska bandwagon missers,The Reluctant Stereotypes, with the truly awful future MTV 'VJ',Paul King of 'King';that truly awful group from Coventry who had a couple of truly awful hits in about 1985,and whose main contribution to fashion were truly awful mullets and doc martens sprayed with paint.....Truly Awful!

A1 Seven Years
A2 Fixation
A3 Looking Daggers
A4 From A. To B.
A5 Clear Cut Apparently
A6 Speech Rapid Fire
A7 John Of Patmos
B1 Knives Replace Air
B2 Faceless
B3 In Your Painting
B4 A Keepsake
B5 Whitewash
B6 No Noise

DOWNLOAD these digital files as memories HERE!
Posted by Jonny Zchivago at 00:53

Awful, I'll be wrecking my brain till the early morn.....

I had trouble recalling them as well, but I think you must mean Minimal Compact...

Bloody hell, you're right expramtraveller!!!! All I had from them was a live concert recorded from the radio back in.... ehrrrr.... probably '82, and probably from the excellent Moondogs show from Bram van Splunteren, wow!!!

With all that's happened this week Eyeless In Gaza would be a bit of a weird name for a band from Israel :)

THANKS!!!, listening to them now on youtube, excellent band Minimal Compact!!!

Lifeless In Gaza is more accurate?

Saw a docu on Al Jazeera yesterday about how Gazans are going into Ramadhan now, saw Abby Martin's docu about Gaza recently and all the images on the news this week, unemployment over 50%, hospitals that are barely functioning etc. etc etc, plus their own total corrupt "leadership", yeah, I think Lifeless In Gaza would be pretty accurate.....

NB that Eyeless In Gaza took their name from a novel by Aldous Huxley. The title "Photographs As Memories" is a reference to the same book.

Thank you for reminding me the past!
One of the first ten LPs of this music I bought in Athens, Greece!
Keep going!

Thanks a lot!! I loved this group since I heard this LP. I went to a gig in London in 1983 and another in Barcelona in 1986/87. I have the vinyl but my Hi-Fi died years ago and got used to mp3 and headphones. I truly missed these songs. Their minimalistic approach is magical.