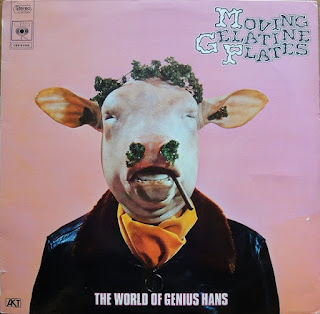 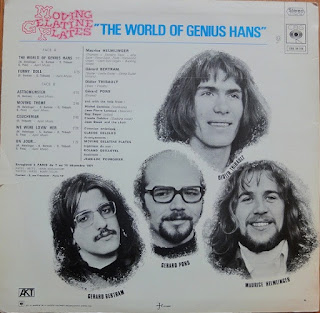 Prog died the day the Moving Gelatine Plates signed to CBS.
Not really, but it sounds good dunnit?
Often compared to Caravan and other Canterbury scene proggers, MGP sound most like jazzy era Soft Machine,who are also lumped in with the Canterbury lot themselves;mainly because some of the members came from that sleepy tourist hotspot and UNESCO world heritage site in Kent,known as Canterbury.The one which gave us,not only The Soft Machine,Caravan and Egg,but Geoffrey Chaucer as well.
Luckily for the  bands who sprung up in small numbers in Saint Thomas a Becket's old stamping ground,where Tom took one for the team; with almost saintly impeccable timing,the M2 had just been finished by the end of 1965,coinciding with the beginning of the UK Psych era. So Soft Machine and buddies had plenty of gigs at UFO and Middle Earth awaiting them in swinging London,just at the other end of the motorway.
Sadly for the Gelatine Plates, they were stuck on the pop music desert island of France,where Soft Machine were becoming rather popular too.So there was plenty of work awaiting any Soft Machine tribute bands who turned up,when the real thing weren't off partying in London.
Despite that Ker-razzy name,and the bizarre cover art,the band don't really live up to their promise.Its all fairly standard Canterbury style jazz prog,nothing wrong with that,but, that was being done elsewhere,dare I say better? There were dozens of petit Soft Machines everywhere in Europe,especially in Germany,where it now gets called 'Krautrock'......but,you silly hipsters, its obviously Canterbury rock innit?
I ain't got two or three hundred quid at hand to buy a copy of this on vinyl,but the CD is reasonably priced,but not as reasonably priced as it is on here.
The bonus tracks are shite from 1980,but they are included just in case you're bothered?
Tracklist:

Still, that earlier soft machine sound is like real estate. They ain't makin' any more of it! So this is welcome. "We Were Lovin' Her..." is a masterpiece, but wrong, wrong, wrong. I think they misunderstood the meaning of "Me Too!".

I think we all misunderstand the meaning of "Me Too",a movement that doesn't exist in France where women seem to understand stuff like that better than the anglo-saxons.

Everything here isn't real, just attempts at siezing on anything that can create a wedge. Someone can profit off of all scandals.

A while back I somehow I got sucked into watching some guy on the internets rank Soft Machine albums in order from worst to best. The "worst", in his not so humble opinion: Vol. 1. Next: Vol. 2. Jesus Christ! I gave up after that, but it just goes to show: some people don't know shit abut music.

Anyways, Moving Gelatine Plates. Ever notice how "serious" "proggers" just love this shit? I mean, it's alright, but it don't blow my mind. A bit... wankery? I guess.

Yeah I saw that, vol2 was the third worst, Land of Cockayne was second worst.
I dunno what my number one would be....i quite like volume 6?

Yeah, Six was kind of a return to form after Four and Five got a bit noodle-y. But by Seven even Hopper was gone and Ratledge's future career as a jingle/commercial composer became evident. Funnily, Napalm Death's first drummer was named Miles Ratledge, which one might easily construe as a typo for "Mike". I just like the idea that in some alternate universe, maybe, Mike Ratledge went on to become a founding member of Napalm Death.