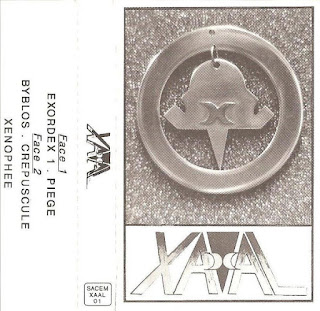 More lo-fi cassette culture Zeuhl in classically fuzzy chrom-dioxide quality,enhanced by a lo-bitrate to make it an even better smothering experience.
XAAL sound very 1990's......there's damming evidence of Fretless bass use,probably with seven strings and a lovingly looked after varnished wooden body.I strongly suspect that all of XAAL's instruments are shiny and well looked after. It's a phenomenon that began in the 90's,shiny chrome mike stands, tidy amplifiers,as new guitars, and tasteless natural wood bass guitar bodies.
One thing I noticed during the recent co-vid hysteria was that the number two item to be seen in the background of Zoom calls,after full bookshelves, is an brand name electric guitar sitting on a stand in the corner .All shiny and new,in barely used condition,to show that the caller is literate, but, cool.
Every fucker has an electric guitar and vast digital multi-tracking facilities these days....even those despicable Politician bastards.All that shite started with Bill Clinton and Tony Blair thinking,mistakenly, that liking Pop music would magically transform them from the awful grinning fools that we know they are, into something cool for Generation X to take seriously.Fool not Cool! Why would anyone want to know that David Cameron's favourite band is Radiohead for fucks sake? Dick'ead would be more appropriate one should suggest,especially as he is officially the second worst British prime minister of alll time,just behind his Eton educated chum/rival Alexander Boris de Pfeffel Johnson.....who to my knowledge doesn't own any musical instruments,but cringingly expresses a liking for The Clash,led.of course, by fellow posh boy,but in this case a dead one,Joe Mellor.....Boris obviously was not listening when he heard their punk socialism by numbers recordings.
Just as refusing to have a Tattoo or any piercings,was an almost subversive stance a few years back,now is the time to throw all those home studio's and guitars onto a large bonfire in the Rock'n'Roll hall of shame. Silence is the new route to self-expression through self censorship...stop repeating this mantra of terminal boredom.  Turns out that the great unwashed took this DIY thang far too seriously. There's too much fucking music now,made by people who don't know any better.STOP IT!.....I crave the return of untouchable rock stars, exclusivity and cliques .The moment the moronic majority like the same things as you ,you know that the games up and its time to give it up.An If they're 'Punk' I definitely fucking ain't!...kinda thing.
XAAL are one of those groups who not only have sparkling equipment, but have that deadly disability of just playing the notes,and forgetting the rest.Like an exercise in theoretical music.
But i'm sure there'll be plenty out there who will delight in their shifting time signatures, and accurate playing.....i know I do.
But that don't mean it's Gud bud. 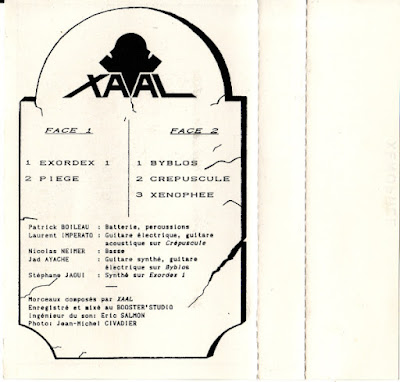 too right about all this home studio horseshit... they said 'anybody could do it', now anybody has ... the number was up 15 years ago, when i was working in a call centre and middle manager types gave out flyers for their band ... it was obvious the infinitesimal DIY scene of 1980ish was a mere burp in the scheme that gave rise to the 'my band' as status symbol situation, of which Blair was the figurehead, moreso than mark e smith or chris rea or anyone between, a social scene wherein folks go thru the motions, then politely watch the bands of everybody else who comprises the audience in turn ... standing around posing with a beer post gig and being non-committally supportive, probably planning to sleep with compadres girlfriends, etc. - basically, the same goings on as would have occurred at their parents 70s dinner parties, but with the variation of indulging the host's rock star pretensions ... Viva Elitism and untouchable rock starz ... i'm sure boris thinks he's stirring leftie ire by claiming to 'dig' the clash, i'm sure said digging only amounts to bobbing his head to rock the casbah at a con club summer fete ... if i was PM i'd just say 'i don't know what music i like, you'll have to ask my advisors' Don't care if Gentleman Joe, John Graham, Woody Mellor was a posh kid, what difference does it make, he got to have his gang and posed well, one can't deny he gave it his all for awhile, he did a very good manic stare. The clash are orwell and good if you scoff at the only band that matters CBS/Rolling Stone hype and don't take them too seriously, I can imagine Joe saying (if he'd have lived), what does it matter, it's the music that counts, we're here for music! Before leading the crowd thru a croaky white man at Glastonbery fayre (yuck) the crowd would be full of bbc execs and MPs from both parties trying to buy drugs. Hammersmith Gorillas couldve trumped them if theyd got the breaks

I agree with all you say William K, we should start the D.D.I.Y. movement,as in Don't Do It Yourself......please!...why do you think i only write about old French prog bands these days....to piss off the fucking punks.

Glastonbury applies for the "I've Never Seen So Many White People In One Place before" award.

The Clash.....third band i ever saw,after Coventry Automatics (Specials), and Suicide...all on the same bill in 78.......i secretly like the clash really, esp first album and singles,and image....i just can't stand the fans,like Fall fans....in fact any fans.

Posh people should be totally banned from us nouveau riche's inherited sruff like rock'n'roll and football....they can stick to Wagner and Fox hunting and leave us alone.