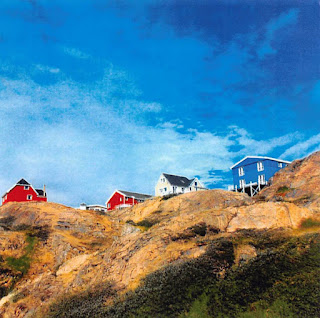 Out of pure laziness,i'm gonna take a restful sidestep from French Prog, yet make a tenuous connection with Jandek, who sounds exactly like Mahogany Brain, a French Prog band who incidentally sound like Jandek. However, unlike Mahogany Brain, Jandek did more than a couple of albums,in fact this recent release from 2021 has enough material on it to make two new Mahogany Brain albums. I hear Corwood are releasing another eight albums this year alone,as the representative's back catalog approaches the 150 mark.
Incidentally Has anyone seen him recently? He may be dead for all we know,and a massive stash of Jandek recordings are waiting to enter the market spaced over the course of the current, and maybe even, the next, century? In fact, even if there were no more fruit left on the tree it would be fairly easy to make new Jandek albums without the man himself. Even his voice could easily be mimicked.
To achieve this post mortem creativity it is essential that one's public exposure is kept in the shadows .A lack of gigs could be explained away as a return to his reclusive years.....which I wish he would do anyway. Simply put, Jandek could become immortal,artistically at least. The same could happen to The Residents, and others who would shun the cult of personality. I hear that Daft Punk have decided to come out of retirement,or at least 'someone' has come out of retirement,we would never know who it was under those shiny helmets.It could be Putin and Lavrov for all we know,other wise known as Chuckles and Laughing Tammy to their adoring friends . For example Phil Collins couldn't carry on in secret after his death,because he didn't wear a mask.Schoolboy error. Anyhow, the wheel chair would give the game away if he started now.Always plan ahead..but...maybe Philip is one step ahead of all of us and really he's Vladimir Putin,and Putin is Phil Collins? This could go viral,and explain a lot of unanswered questions?

This double CD seems to have been recorded in a studio,hence the title lacking a day of the week and a place name.Its basically the same improvised stuff,otherwise known as Mr Smith pissing about for an hour or so,that he's been doing,with his talented friends, for the best part of the last twenty years.Really it could be anybody from the vast world of improvised music playing on this record for all we know. The give away is that there's only one person playing who doesn't really have a clue what he's doing......ahhhaa that must be Jandek......or,someone pretending to be Jandek, or even a representative of Jandek? We may never know.....or care?
Tracklisting:
1-1 Slow Walk 28:05

DOWNLOAD what may or may not be jandek HERE!

Yes! This is the kind of laziness I like. I'm always happy about a new Jandek post - even if it's just to check out whether this is good Jandek or one of those allbums that seem to take the piss.
And I'm quite sure this is real Jandek and not Putin because Vlad the Great, I think, was the one who can beat the drum (or was that the other bald guy you mentioned?).
And from what I'm hearing right now this may well be among the Jandek albums that are worth checking out. Many thanks and best wishes from Munich!

Yeah! its a good one...i failed to mention that i guess,but then again i always do....with exceptions.

Discogs seems to think that John Darnielle from the Mountain Goats is one of the players.. God knows where it comes from :)

Discogs could well be right....vlad collins is a very naughty boy.