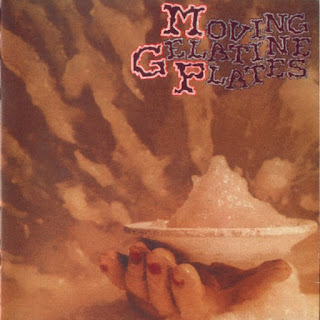 CBS (Can Be Shit), not very DIY (Do It Yourself) I know, but however misguided the corporate interest,these evil organisations can sometimes do world culture a favour and provide for us monkeys something worthwhile.Yep, it's the Moving Gelatine Plates' debut album, which,despite an inferior cover to its successor is,probably,slightly, better? Yes dey waz a gallic Canterbury scene Soft Machine tribute band in essence,but if you close your eyes it could actually be our heroes reformed and back on Soft Machine's Third form?...well almost.
Inevitably,the corporate interest waned when the dumb bastards(CBS) realised they weren't gonna get a number one hit on the Billboard top 200, and sadly had to cease spinning the plates and let them crash to the floor.As was the destiny of 99.999994% of all pop groups (figures taken from the national office of Statistics).It's dog eat dog out there,but you might get laid for your troubles,which is basically all a young male human wants out of life anyway so who's complaining?Money and fame you will NOT get......especially in the present.
Without randy dick-led show-offs there would have been no new inventions,new discoveries,No Art,and forever relevant to this blog, FUCK ALL MUSIC!
As your author's labido is currently winding down,this blog's continuation is in the greasy hands of mother nature;although I have yet to get laid because of my wordy internet activities,at least not to my knowledge.I did wake up in a post alcohol stuper  a few times with a sore arsehole.....but the doctor assures me that was just hemorrhoids or a Freudian Adjective about myself?
Shit! That means the only reason for making music theses days is "Art for Arts Sake" for Fucks Sake!....hey,wasn't that a song by 10cc?
Tracklist:

"Without randy dick-led show-offs there would have been no new inventions".
Absolutely. The story of life (I'm not complaining). If males had been able to suck their own, we'd still be in caves.
The other part, the meaning of life was provided by Kafka: "The meaning of life is that it stops."
Those 2 rules create an interesting game.

Not DIY, but Major label albums from the early 70's, that not
much money was thrown at, are the next best thing...

Nico's "Marble Index" sold only a few hundred copies in it's first decade--prior to compact disc reissues, that is. I almost get the sense that major labels employed lots of people as fucking clueless as Richard Branson about what sells back in the 70's. Either that or they were just fucking awesome and didn't give a crap about whether or not it sold--they were just stickin it to the man!

Re: sore assholes and less sinister connotations. Give Mike Watt's interview with Marc Maron (on WTF) a listen--the first twenty minutes or so is like some primo French body horror, only American. 'Pedro, to be specific.