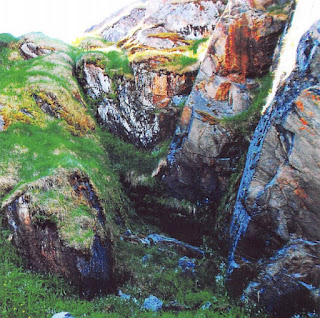 Another Studio album by the black clad ginger whinger,....we are not worthy....well...we are very worthy actually. Just wish Corwood would get on the vinyl reissue trail. Trouble with that is that none of modern Jandek would fit on one disc,a double albums at best. They would however be a thing of great beauty,clad in Gatefold sleeve,and four of Sterling's inexplicable photographs adorning the available spaces.
We will wait and see if that Canadian 'superfan' (forgot his name) who sporadically threatens me with violence could possibly suggest that to the man himself,as he reckons he's his manager whenever the Jandek visits Vancouver.
This very acceptable droning atonal scraping violin stained epic, suggests overdubs,which I can't recall The Representative ever doing before.....of course he likely has,its just hard to pinpoint any particular recorded event from the ever widening canon of the king of all things Outside.
This is The Corwood Representative's version of Tony Conrad and Faust, even further outside the Dream Syndicate, with the best violin abuse this side of 'Danny and the Dressmakers' all encapsulating violin solo in "Don't Make Another Bass Guitar Mr Rickenbacher"...except Sterling has managed the impossible and stretched that out over the course of a very entertaining fifty fun packed minutes.
It also appears that Jandek is the only (uncredited) musician, unaccredited, in the recording process of this, one has to say, very good album indeed.**** out of *****?
The date of the recording also seems to be absent,so I can't decipher if it's a recent recording or not.So, as a result one cannot ascertain if this disproves my increasingly tenuous Jandek is Dead theory. Someone working down my local Chip shop however, is a ringer for Sterling Smith,but he insists that he's never heard of Jandek......his pupils dilated as he said it,then after serving my Savaloy sausage,chips and curry sauce,promptly disappeared into the back room,from whence i'm sure i detected the muffled cries of a young woman.I could have reported this to the police but I was pissed out of my brane and had to drive home!
1 The Mountain Step 3:56
2 The Linger 13:03
3 The Ladder 10:51
4 The Languish 20:33
DOWNLOAD from the mountain HERE!