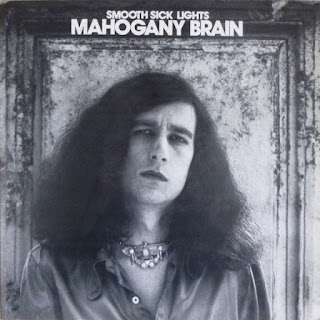 Mahogany Brain invented UK DIY,even though they are French, and Outsider Punk!? You know rather like how The Ramones didn't Invent Punk Rock, and the Bad Brains didn't invent Hardcore.The difference is that Mahogany Brain didn't claim to have done anything, after the fact.
This album could be passed off as a lost Jandek album,in fact, this was released,four years after it was recorded, around the time Jandek was called The Units,and made "Ready For The House". It could also be the first No Wave album,or Danny and the Dressmakers on a bad day,The Prats ,or any number of UK DIY legends......but these nutjobs are french ain't they? There's no way Mahogany Brain would get a cultural arts grant from the French government making stuff like this.They can't play!....which was especially rare in 1972 when this was recorded.The only chord these zany chaps knew is the cord that leads from the guitar to the amp,and that's exactly how it should have been.Sounding like four persons playing four different tunes,all out of tune, at approximately the same time.Outsider Prog is the best i can do to categorise this rare work of Gallic genius. Like all of the realllly great bands,they played only one gig,then it was mission accomplished.Which explains the look of confused satisfaction that adorns the face of band leader Patrick Geoffrois.They would have been huge in 1979,if only they had waited.
Tracklist:

Patrick Geoffrois went on to play in the Contortions (!)

But what became of him after that? Funny you should ask!

I have been looking all over for this release. I think silk skin dawn was the only track I could find, somewhere on YouTube. This made my day, you rule.