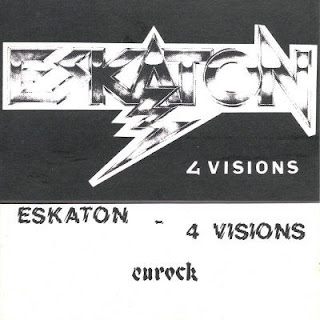 Fun to see that this cassette was released on the Eurock label,which not only draws a clear demarcation line between continental europe and the anglo-saxon music empire,but reflects the section in the record store of my youth,which was called Euro Rock;where i first gained access to the unfathomable world of what those european types did for entertainment when they weren't churning out toe-curlingly bad cheesy disco hits ,tooth-grinding ABBA-fuelled Schlager anthems and truly horrible wrist slashing Euro Metal like "The Final Countdown".
Yes there was indeed unmistakably modern,continental music, that,unless you saw the band pictures,didn't first invoke laughter on behalf of the willfully ignorant average Anglo-Saxon pop picker.
These Euro-rockers looked like clowns,but free from the shackles of having to gain a 'hit' in the UK or USA,they could spend a longer time actually making the music that they wanted to. This was especially evident in West Germany,who had that great burden of post-war German Sartorial ineptitude to grapple with,as well as a dumpster full of Holocaust guilt to assuage. The french didn't have that burden of Holocaust guilt to attend to;although not squeaky clean in that department,they did largely get away with it.Sartorially, marginally better dressed than the average modern Bosch gentleman,musically they came up with the very Wagnerian concept of Zeuhl.....I say 'They'....it was more or less invented by Magma,or to narrow it down some more, Christian Vander done it guv'r sir so he did......said the Hollywood Pearly King.
And it is Magma that immediately comes to mind when listening to Eskaton. The only difference i can detect are the vocals, which are in French rather than Kobaian.....which,for the few of us who don't know, is the made up alien language that literates the parole of Magma's operatic female singers.
Like Magma, Eskaton also have a pair of operatic hippyfied Brunhilde's at the fore,who adequately up the aural oppression stakes like a less Nazi-fied version of ABBA,but somehow seem more accessible than Christian Vander's Wagnerian rockers. I dunno weather Zeuhl-lite is appropriate here, but they are as Zeuhl-lite as that particular format goes.......i may have to post a Magma Album I suppose? 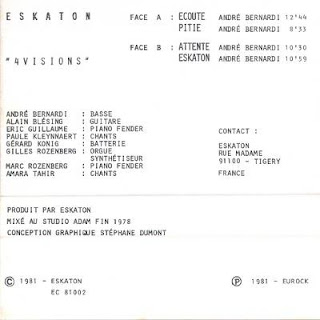 Loving all your zeuhl-related shares. A lot of prog I've obsessed about as some point is of little importance to me nowadays, but zeuhl never gets old.

you are so right.
There is a thing that happens sometimes, where quieter Zheul is almost canterbury. The last Univers Zero album is such a case, though of course not Zheul, though all dissonant and time signatury.
Musical style is on a circle. When my nephews first heard Univers Zero (1st 2 albums) they thought I was playing Soundtracks from the black and white season of the Lost In Space TV series!

Well within the Zeuhl circle and totally excellent!