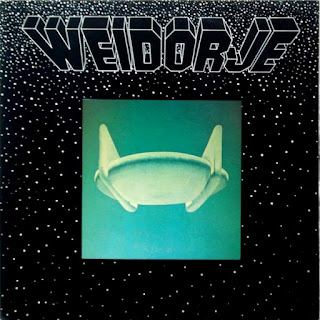 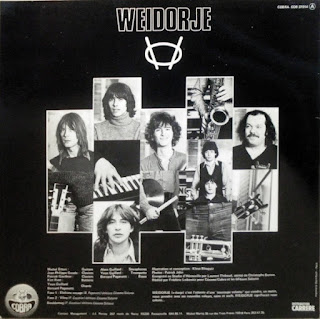 The envious ears of a bunch of over-paid Parisian session men vibrated to the sound of Magma and they thought that they could do the same...but,as musicians are prone to think, they were better at it and could do better.
They managed to release just three tracks in their lifetime,which made up their sole album,here beefed up with a couple of live outings
They were of course very Magma styled,even nicking their Kobaian name from a Magma track,blending in elements of systemic music, and some saxophone.An element long ago dropped in early Magma giving it a distinctive sound of its own(it says here!).Yep....more Zeuhl-lite for potential chart action.The ill-advised use of Brass steers proceedings firmly towards the Fusion-end of Zeuhl,but at least those Wagnerian Brunhilde vocalists don't make an appearance.
The session men involved soon realised that there was no money in having their own Zeuhl band,and soon melted away back into playing guitar solo's for Johnny Hallyday or arranging romantic string sections for Sacha Distel.
They did however leave us one of the most listenable French Prog records,that may even attract people into the room rather than drive them away from it....dunno if that's a good thing, but sometimes its useful.Even if it's just to avoid the noise of the unenlightened majority demanding that this racket be turned off.
Tracklisting:
1.Elohims Voyage 16:33
2.Vilna 12:20
3.Booldemug 7:10
Bonus Tracks:
4.Rondeau 8:49
5.Kolinda 12:28
DOWNLOAD this wee orgy or for the benfit of Donald Trump that's kobaian for pee pee party HERE!

Well, to be fair, Bernard Paganotti and Patrick Gauthier were both Magma veterans.

Sometimes when I'm feeling highly uncertain about everything, I ask myself: what if Jesus Christ had played bass like some of these Zeuhl guys? Would it really change anything--I mean, if he existed he probably _did_ play bass like these guys--Paganotti probably lifted whatever the hell he's playing in the latter part of Kohntarkosz, Part 2 from Jesus, yet (nearly) everything is still crap.

I meant Jannick Top above.

Apparently in the uncensored version of the gospel according to Judas,judes describes some pretty hefty jamming in the Garden of Gethsemane,fueled by some pretty strong drugs.Of course Christ was on Bass.....but did his daddy play tenor?
This was Jesus's last miracle as there was no power supply in the garden. Even the Romans had to concede that "This Boy sure can play guitar".
Judas took his ill gotten gains,faked suicide and moved to France,plagiarizing his former boss,and invented Zeuhl.
The banned book of Mary confirms most of this.

Yeah, there was a time that i thought it would be fun to dress like sonny Crocket. But winter in England put an abrupt stop to that flight of fancy.
I do remember walking to the bustop listening to magma on my newly acquired discman when some kids threw dog shit on my trousers and ran off shouting "TWAT!"
There are more shit connections.....That discman was stolen from my shop in about 1989,and the burglers left a freshly laid turd on my swivel chair...a common occurrence said the Cops.

Hi, any way you have selftitled album by La Voix Celeste