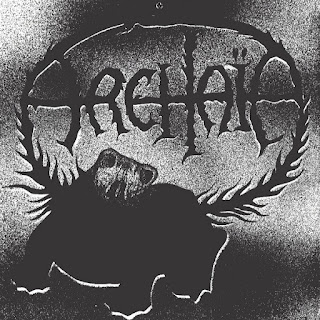 Unlike Punk Rock,which was at it's zenith when this Zeuhl homage was released. Zeuhl took its time to have any copycat groops following in Magma's footsteps.Whereas, there were legions of little Sex Pistols cropping up within 48 hours of the pistols first gig propah!...it took a good 5 or 6 years to get any little Magma's.
Incidentally John 'Lie'don of PiL (see what I did?) was a big Magma fan,and attended any London appearance of Christian Vander's outfit with his equally enlightened mate, John Wardle....aka Jah Wobble.
Also a big fan was Pierrick Le Bras and his mate Michel Munier,of Archaïa. Although a pair of Magma nuts ,they admirably tried to play something inspired by Magma's music but via a different path: using only percussion,no drums(great idea),guitar and keyboards.
The result is a less oppressive form of Zeuhl...if this is Zeuhl at all(?),,,or maybe its because they couldn't play their instruments,leaving,in my opinion, more space in the music,and less chance of smothering the listener. A bit like the difference between The Sex Pistols and PiL in fact;who also couldn't play, so they say.Daring to be minimal.leaving room to breath and grow,the art of subtlety free from the oppression of Vander's attempts to be Wagner's most favourite Rock band.Thankfully also absent are Vander's Brünnhilde substitutes,who do tend to get on one's fucking Titz!
Today I think that this is better than Magma, but tomorrow I may think the opposite,it depends on how pissed off I am.....or,for those superior purveyors of the noble mother tongue of ye olde Albion.....in English, how Pissed I am. That means 'Drunk' to those from the colony where we exported all our religious nutters to...sorry about that,but it had to be done.We,the English. also exported our criminals to Australia.which is probably why they always beat us at sport.That suggests a strange correlation between crime and sporting prowess? Hummmm? ...either that or Stupidity? So, as an tenuous attempt to provide some evidence,i can only point to the fact that my Aussie relatives are mostly stupid,and my american family are mostly MAGAphiles.....or worse....if that's possible?
Just one final topical observation from leftfield to close....PUTIN IS A TOTAL FUCKING CUNT OR WHAT?!...and any of you conspiracy twats who wanna argue the toss about how this prick is a dove of peace...please come forward!
A1 Soleil Noir 4:31
A2 L'arche Des Mutations 9:29
A3 Sur Les Traces Du Vieux Roy 5:00
B1 La Roue 2:31
B2 Le Festin Du Lion Vert 4:42
B3 Massa Confusa 3:18
B4 Le Grand Secret 4:18
B5 Vol Du Phenix 3:50
DOWNLOAD the alternative 1977 HERE!

putin is a great man. russia's war (if indeed it comes to that) a just one. disappointing that you can't see this.

They're always 'unknown' or Anonymous' ain't they?....i'll deal with this in the morning.Can't be arsed to write the bleeding obvious when i'm tired...something to do with journalists falling off balconies, Gays, falling off buildings, and wives with injuries that don't show...not to mention how leaders of the opposition magically get murdered or imprisoned...very just.
A great Man? I think blindingly obviously Not....a Just War? Has there ever been one? Maybe one in the 40's to remove a short-arsed dictator who murdered his opponents,journalists,gays,politicians,and protesters......Then staged phony referendums to annex territory in the name of protecting his 'People' .....sound familiar?....whoops wrote too much,is that the time??....this guy is either Russian or an idiot.

Yes, they always are anonymous. Anyone who's a friend of tr*mp is an enemy of mine. That'd be Vlad. BTW, wtf's a great man? Not sure one's been born yet, while sycophants are a constant. ‘anon's flag is a nasty rag that a sane man wipes his ass on.' https://www.youtube.com/watch?v=_2D-UY9OrN4&list=PL629FufafHEiYI48SpC2bxghbpfPLcQu-&index=7 I'd wipe mine on Putin's flag if he had one. I pity Russians their Vlad in the same way I pity American their tr*mp, Britons their Boris, fucking cunts all.

Indeed,France has a couple of wanna be presidents that make Trump and Putin look ,and sound like the Carpenters.....one policy mooted for this neo nazi Eric Zammour cunt is a total ban on Non-French names!!!!?...this is true!....at least he's taking votes away from Marine Le Pen (the nicer nazi)...makes Macron seem like the messiah. Unfortunately, thanks to Brexit i have no right to vote in either France or Britain....thet'a freedom for ya innit?
A great man would be someone who finally recognises the unimportance of borders, race, and politics.Then resigns.

Kinda sad when people like Macron or Merkel seem "reasonable" or "sane", if only because most of the rest are such vile and loathesome pieces of shit. They even make W. somehow less awful in retrospect.

Stella or Christian Vander should run for president of France. UK PM? Maybe Tony McPhee or Charles Hayward. US? Drawing a blank at the moment and Neil Young isn't qualified (not US born).

"A great man would be someone who finally recognises the unimportance of borders, race, and politics.Then resigns."

Just taking my opportunity to say I'm a big fan of this blog. Always enjoy the takes on Jandek, too, being a Jandek nut:)

As a Russian, I stand with Ukraine. Down with Putin! Slava Ukraine!

Hi rabid Rabbit, i did make a rabid rabbit sculpture once back in the eighties, before putin (which is a swear word in French by the way,meaning prostitute/whore) Putain!.
Be careful or they will send some thugs to accidentally throw you off a balcony,or smear nerve agent on your doorknob.
We love you Russians,but like trump era america,the leaders let us all down.

Ahahaha, yes, I like this nickname.. reference to being a South Sydney Rabbitohs fan (NRL):)

LOL, very true about Putin name and also the comment about our leaders. The country has enough resources and land to really be able to care of all its people, if only all of it didn't get stolen!

I have to admit, I do live in Australia (came here when I was around 12) but after all the anti-Putin stuff I post under my real name on FB, I can't go for a visit there anytime soon 😅

Thank you for your good work 😁