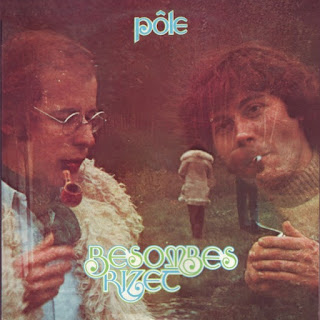 Another French electronic duo,but this time without disguises,and looking at them maybe they should have? Dunno which is which, but one of them, be it Bescombes or Rizet smokes a pipe.Not enough pipe smokers in progressive rock for my money.
They also had a remortgaged house worth of keyboards: VCS 3 AKS, ARP 2600, Electrocomp 101 and 500, Farfisa Synthorchestra , YamahaF Y 1, Oberheim Expander , Solina Stringensemble , Crumor electric piano, Fender Rhodes electric piano, Hammond Organ and,last but not least,a Mellotron 400.
All that and a pipe too!On paper this sounds perfect.
They didn't waste time on creating a trademark sound.There's nothing here that, if you didn't know better,you could sit back and say, "Ahhh, that's Bescombes and Rizat that is".Bouncing between Cluster duetting with Rick Wakeman after his fingers were amputated, to Robert Rental before he was Robert Rental,but spacey enough to be Robert Rental after his death. It's as if they,shockingly, had never heard of Mozart,which was an obligatory influence for all progressive rockers in 1975,alongside numerous versions of 'Lick My Love Pump'by many a proto-nwobhm band in Birmingham or Essex; Not for Bescombes and Rizet was the electrification of the usual suspect suspects from the sleep inducing classical era; they wanted to experiment!?
There's also not many albums that are named after their record label either......how cool is that? As Captain Oates said on the now speedily melting Ross Ice Shelf, "I'm going outside, i may be some time".....when in fact he was checking out this immortal French Prog double album on the hotter part of the Pôle,to be thawed out approximately fifty years later at the most southerly record fayre held in the spritual wreckage of Shackleton's Discovery. Now everyone wants a piece of this Discovery,so here's your chance to step outside and stay there for the duration of the four splendid sides of this electronic prog miesterwerk.
Just a small francophobic  aspersion to come, as i've been quite nice to them recently. If Scott's crew had been French, they would have pushed Captain Oates out of the tent to certain death to save themselves rather than rely on his noble deed of self-sacrifice.
Bescombes and Rizet got to the Pôle lomg before Amundsen,and they didn't even have to leave the warmth of the studio....all likely paid for by the French Government's vast Art Grant's department;to the astonishment of the UK Tax Payer,and beyond.Bloody Socialists!
Tracklist: