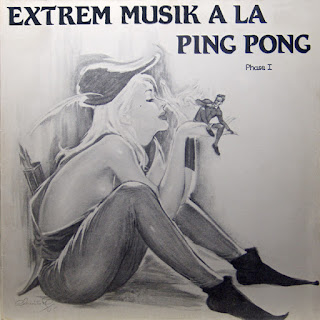 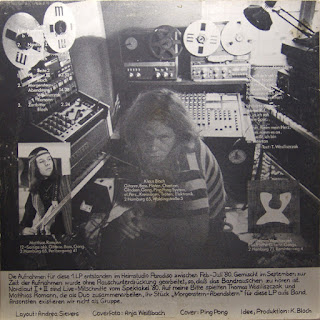 I could have sworn I was listening to Fripp and Eno,turns out it was another long lost "Krautrock" DIY meisterwerk by some hippy untermensch called Klaus Bloch, who manages to sound like Mike Oldfield, Robert Fripp, Mike Oldfield, Manuel Gottsching and Mike Oldfield jamming to some Eno rejected tape loops.
There's inverted comma's around the Krautrock accusation I foolishly made, for that unfortunate moniker doesn't apply to the Cluster side of all things Kosmische.The rock stuff belongs firmly with horrible nonsense like Amon Dull 2(sic), Ash Ra Tempel and Guru Guru ...read my ground-breaking in depth slagging of Krautrock , "Mommy What's a Krautrock?"HERE! ....ah, so now I don't have to repeat myself,so let us begin.
One aspect of the Anglo-rock scene that hippies in West Germany really wished they sounded like,apart from Soft Machine was Space Rock,namely Pink Floyd.It meant that you didn't have to learn to play your instrument,and with the help of a tape-echo you could bang out a self-financed LP of ambient space rock quicker than you could say Max Planck.The trouble with that was, that by 1980,the Floyd had moved on to doing dystopian musicals instead.So i guess there was still a market of disaffected 30 year olds still hankering' for "Set The Controls For The Heart Of The Sun" part...er..well ask Max Planck.
Good musick for your flotation tank,or for meditating to an Alan Watts lecture for some much needed back-up.I'm always a sucker for a black and white album cover.
BOLLOCKS!....I can feel a DIY Kosmiche episode coming on.Must take my medication!.....fuck it,I love paying backhanded compliments to Germans,and mentioning the war;so be prepared for some weird German loners with boners and synthesizers,inserting their jack-plugs into analogue echo machines.
Tracklist:

Speaking for myself; this is a fantastic record. I just love that someone else is doing Frippertronics.

Speaking for a friend, this is a fantastic record.What i usually do is run two out of phase loops on my computer, get out my E-Bow, and analogue echo unit,and fart around on guitar for a couple of hours.
The best unreleased Fripp and Eno i've yet heard....you should try it.

oh wow ! what a lovely album.....many thanks for sharing this and I appreciate all the time and hard work that goes into your wonderful blog.....stay safe & healthy my friend.

I appreciate exposure to such Gems - thank you very much...

Always a pleasure coming here, moreso when i'm bored, or like today (19.7.22) slowly melting. Nothing ever seems to need me asking for a re-up, and besides finding old, long-lost faves (Punilux) i get turned on to new stuff (Jackdaw With Crowbar.) Here's me hoping our love affair doesn't hit a raw patch with this one.

No, I'll always love you richie....this one seems popular with the punters...if you like Fripp and Dno...who doesn't?...then you should likey.