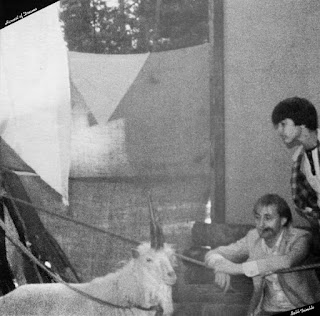 There aren't enough candid Jandekian monochrome photo's as album covers going around I say!? I feel the same about Monoaural sound too,but unfortunately Bobb didn't go for that on this one.
This file isn't the original album,as I don't got a spare three and a half grand hanging around that I dunno what to do with,so the CD re-issue is just fine by me.The three grand i'll just spend on medium level prostitutes,drugs, and a reconditioned Austin Allegro van den plas....in metallic orange.......i'll just waste the rest.

The reissue even has a hi-quality colorized version of the album photo, which reveals, that Bobb looks disturbingly like UK kids TV presenter,and the criminal responsible for the gay romp that hit the charts in the early nineties "Itsy Bitsy Teeny Weeny Yellow Polka Dot Bikini"....none other than Timmy Mallet.(Who??? Says the non-British part of the globe)
I can forgive Bobb,with three 'B's, if he really was Timmy Mallet,as he released at least two excellent outsider Psych albums that paid little or scant attention to whatever the fashionable Hoi-polloi of the time was listening to....mainly Duran Duran and the Thompson Twins for want of better examples.
One characteristic, other than looks, that Bobb shared(shares...is he still alive?) with Timmy Mallet,was an enviable talent to not give a fuck about what anyone thought about him or his music,or even his girly voice.This wipes the floor with the shitty arse end of most identikit american sixties hippie folk.There's enough backwards tapes and flanging to please any acid casualty,and behold, a silent track to freak them out if they're on anything vaguely lysergic in nature.
Tracklist: