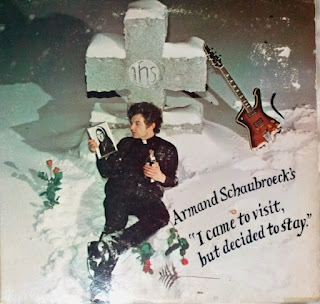 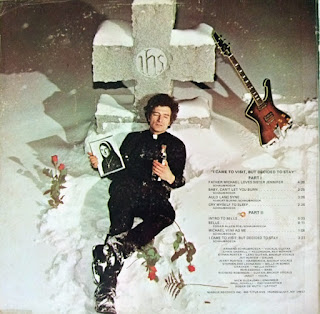 In 1962, after a series of 32 burglaries that included groceries, hardware stores, schools and a church, seventeen year old Armand Schaubroeck was sentenced to three years in jail. He was charged with safecracking and thrown in the Elmira State Reformatory, a maximum security prison in New York. He would get out a year and a half later on parole but the impression would remain vivid in his mind.
...Apparently his imprisonment acted as a catalyst to the birth of his very unique and somewhat deranged rock 'n roll persona- he named his band Armand Schaubroeck Steals and all his music seemed to be a cathartic exorcise to the obsessions that haunted him.
After his release,He and his brothers founded a musical store that is today one of the most successful in New York,which not only provided him with a lucrative living,it allowed him to live out his assumed personality to the max.
Not only did he have relative monetary independence, he also had a whole place full of instruments for himself. He built a studio in the store's basement, created Mirror Records and recorded a handful of albums that were personal, obsessive, ironic,read as self-indulgent,
and an attempt to be deliberately abusive to public ears.
But,......
Despite the promising cover,and his acquired Rock'n'Roll persona,it reveals that even a reformed safe-cracker needs something else other than money to make a half decent record.A personality is certainly not enough.
The music is that forgettable style of '1974 rock' that John Cale used to force on a public desperate for something wild and dangerous;but what they got was plodding session man rock as heard from above by a classically trained(there's that Phrase again!), composer,and we're told this is the real thing.Lou Reed,who i guess Armand would like to have been, also fits into this category,save one or two tunes.Unlike Cale,who would have loved to be a rocker instead of a neo-classical composer,Lou Reed was a rocker who wanted to be a neo-classical composer and taken very, VERY seriously...but even he got Mick Ronson in to help,and Mick was of course...."Classically Trained".
Armand wasn't clued up enough to hire an arranger, so he churned out a bunch of Lou reed/john Cale out-takes and acted the part of the crazed wild-man in his attempt to gain attention.Look at me Mom I'm Dancin'!
Before all you Velvets/Cale/Reed fans write in hailing this body of work rightly heralded genius,i concede that Cale's lyric are rather good,pity about the backing track,and Lou reed always gave a good interview around 1974. The fact that there was absolutely nothing else around back then probably explains their appeal....you had to be there i suppose,to appreciate it. I wasn't.
All this, we are told......Again....is 'Proto-Punk'.....yeah right.

Some kind of weird synchronicity led me to this post. I was listening to VU circa 1993 'The Gift' as the email heralding this arrived in my inbox.
I almost never listen to the Velvets these days so this must be some kind of sign.
Guess I better download it then.
Hope life in Zchivago land is treating you well.

For the longest time I thought this was some kind of legendary grail document that I'd never get to hear, and when I finally did decades later.... meh. At least no Chris Spedding.

Technically these albums are coming up.....they're also not too great.

hello, thank you for this gospel music. any armand is fantastic and a taste of heaven. i actually gave a friend some armand vinyl as a wedding present. they're still together. hopefully more is coming? over the years i think i have all of it. nice to review and refresh and realize great music is timelees. i put the material on cd of his. find walking my dog with RATFUCKER ON THE HEADPHONES IS PARTICULARLY SOOTHING. they should play "queen hitter" on the radio. again thank you r. keith