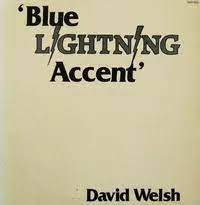 This is so outside that I can't find sweet F all about this record on the Information super highway.It sounds not unlike a vinyl record with the center hole punched 2 degrees off kilter,which I think Boyd Rice did on Pagan Musick if I am not mistaken? The off kilter nature of these bizarre structureless tunes however, is nothing to do with mispressed plastic,but a lot to do with either recreational drug use, or prescribed drug use for a severe mental disorder.
Beefheart's Magic Band faced months of poverty and physical abuse to get music like this together,it's just missing Van Vliet's Howlin' Wolf impression;and its certainly much better than any of the Captains post-Decals releases. David Welsh's sleepy singin style, like a tone deaf Robery Wyatt on mogadon, adds a certain splash of vulnerability to proceedings.
The eccentric song structures,drifting Syd Barratt time signatures,with the Madcap Laughs drumming,desperately trying to follow Davids meandering Guitar,is purely unintended.Welsh undoubtedly thinks this album is groundbreaking,and should naturally be number one.He would be correct, but for different reasons than he would think.
In a world where everyone thinks and dresses as if they are a Rock Star, some people should just never pick up a musical instrument....that's right,shit like The 1975, those fucking Vamps, Blink 182...it's as if music was never invented those twats are....but there aren't enough David Welsh's around; lost in the flood of wannabees who think they're David fucking Bowie...the man himself was awful enough without a trail of tattooed and pierced zombie popsters wearing someone else's tattoo's and piercings causes one to wish that the Taliban would come to our rescue and ban music.....Forever! .As Outsiders go,Jandek's broken through to a certain extent on the art luvvie scene, but anything other than a strict 4/4 beat still has the power to start a riot,rather than add to the smooth unchallenging paste that modern muzak has become.
Tracklist:

A1 6's, 9's, Tens & Towers
A2 The Climb Into Heaven
A3 Rock Drummer
A4 Water Fall
B1 Blue Lightning Accent
B2 The Time Is On
B3 Cross Angle
B4 Blue Morning
B5 Keeping Pace
DOWNLOAD like blue lightning HERE!

Many thanks for this heroism.

Hearty thanks to you both.