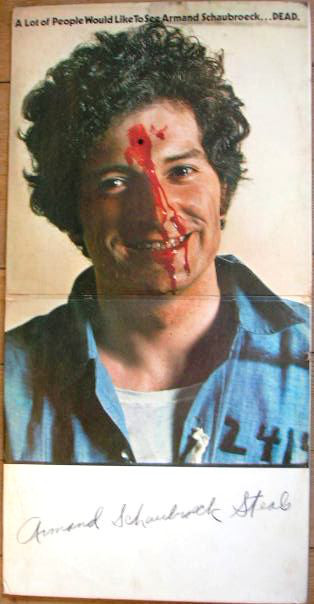 My father, may their lord rest his soul, could turn every subject or eventuality,no matter how mundane, back on to his favorite item of interest.....World War Two. His whole life was stuck in a short few years in his late teens and early twenties. You name it you could twist it,.....Bay Leaves? Didn't have any of those in the prison camp,we used cats ears as a substitute for the cat stew. No salt for seasoning there,we had salt substitute as provided in our Red Cross parcels.....he could go on forever.Don't mention the War!
I suspect that Armand was the same about his thieving and prison years.
Don't mention Prison whatever you do!
Yeah, we get it, he's been to prison,but is there any need to make a triple album semi-autobiographical Rock opera about it.
Cathartic yes,necessary,most indeed NOT!
This is tailor made for an Off-Broadway musical.
Musically it's Very Mothers Of Invention speech sections meets Lou Reed in a bad musical.
It does however have its amusing parts,and it certainly puts one off from going to jail.Good Cover too.
I would nonetheless, love to play the role of one of the Black convicts as featured on Disc 2.I'd do it better too!
"Sheeeet honky am gonna kick your juicy white aaaaassssss baby."
I suggest that Armand wasn't as brave as the Honky character sounds on the album;but that's artistic licence I suppose?
Apparently you can still purchase sealed copies of the original pressings from Armand's music shop,very Off Broadway in Rochester- New York - "House Of Guitars."
Tracklist:

A1 Scene 1 Armand (17 Yrs. Old) Confesses His Crimes To A Priest "King Of The Streets"
A2 Scene 2 Armand & Dan Go Down To "Rock A Bowl" To Steal Dimes From Bowling Ball Polischers (50's Live Band Plays In Middle) "I Don't Care"
A3 Scene 3 Out On Bail, Armand Is Alone With Suzie (Night Before Sentencing) "Love For The Last Time"
B1 Scene 4 Elmira Bound
B2 Scene 5 Mr. Tomato, The State Public Relations Director Addresses New Inmates
B3 Scene 6 Dr. Leiderman, State Psychologist, Interviews New Jacks Privately To Determine When They Will See The Parole Board And To What Institution The Inmates Will Be Sent "Games"
B4 Scene 7 Why Do Children Steal? (Armand And Dan's Background)
C1 Scene 8 Christmas Eve In Elmira "Cut My Friend Down"
C2 Scene 9 Dr. Leiderman Interviews Howard Q. Sappy Who Was Sent Up For Attempt Of Suicide "Streetwalker"
C3 Scene 10 A Inmate Reminds Armand Of His Girl "The Young Boy"
D1 Scene 11 A Black And White Are Aguing Over A Comic Book Because Each Wants To Look At All The Colors "I Wish To See Color"
D2 Scene 12 Mental Breakdown In Solitary Confinement "Fading Out"
D3 Scene 13 "We, Like Lost Sheep Are Drifting"
E1 Scene 14 New Young Inmate Meets Lifer
E2 Scene 15 Stage Break (Taped Live) "God Damn You"
E3 Scene 16 Friday Night Radio Plays Old Tune Reminding The Population Of The Streets "Sweet Sister Suzie"
E4 "Turn Off The Sound"
E5 Scene 17 Visiting Day
F1 Scene 18 Night Before Parole Board
F2 "One More Day, One More Night"
F3 Scene 19 Parole Board
F4 Scene 20 Hack Talks To Arm On The Way Out "Ex-Con"
F5 Scene 21 Dan & Armand Meet On The Streets While Going To See Parole Officer
F6 Scene 22 "Warden's Circus"
DOWNLOAD this vinyl alcatraz HERE!
Posted by Jonny Zchivago at 11:58

I had this once upon a time, very hard to get through one side, let alone six....shifted it on Discogs some years back, got a goodish price so not all bad.

It's always a pleasure to read your highly entertaining posts. However, I wouldn't mind some music again for a change. Best wishes.

He was a formative influence on the young Lydia Lunch. Fact! She grew up in Rochester and used to hang out at his shop.

@ FlaccusMUC....Music?.....what's thast? Adelle, that ginger bloke with the little duitar? It's all subjective,there's not too much on here that most people would call music anyhow....i'm still working on that Elton John post.

@Jonny ... Yes, I know. And of course, there is so much wonderful music here in your blog for which I'm truly grateful! I guess I could be said to Armand's credit that his "music" could be considered irritating even in this environment, which is full of higly irritating albums. That's quite an achievement.