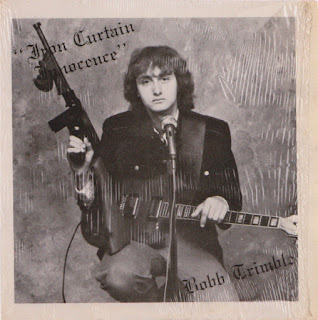 There are always some people.....if people is the word,...who could miss a bus even if they were camped down at a bus stop all day. Bob seems to have missed several waves before he finally got his self-financed album of psychedelic folk strangeness pressed up. What he intended to do with 500 copies of Neo-Psychedelic Folk in the post-punk hinterland of the pre-hardcore USA I dunno? Maybe pile them up to make a handy coffee table perhaps? Coasters for dinner parties? Who knows?
The album title and  bizarre cover shot would do little to appeal to any surviving long-haired friends of Jesus who should happen along with $3.99 in change to spend.
But, give it time, like a fine wine, music evolves with its future audience. Twenty years later, a world sick of music made by machines,fueled by noble quests to uncover the strangest of forgotten musics, made by the malfunctioning biological machines that was once called 'Mankind',to which one must now add a gender pronoun to it's name badge,and 'IT' is an adequate and reverential  pronoun to use for "Iron Curtain Innocence".
Usually, those outsiders who plough a lonely furrow of ridicule and dismissal, make music, that is by all modern standards,uncomfortably beyond categorization,but exudes an undeniable charm that seems beamed from a rogue exo-planet roaming in interstellar space. pure but utter shite to the untrained ear,yet is undeniably funny,and unique.....but.....Bobb,with three 'B's',has made an undiscovered classic piece of psychedelic Folk that meets the modern standards of underground weirdness that today's normal people require. Ahead of his time, or thirty years too late,either one applies.
Tracklist:

Notice most of the people using those pronouns, bravely admit they are he/him and she/her. But their use of the pronouns lets us all know how evolved they are.
"Yes,I, assigned female gender at birth dare call myself she/her. I'm sorry if that bothers you, grandpa, you're just gonna have to get used to it!"

jUST FOR THE RECORD, I AM AN 'IT'...unless i mentioned thast before...can't remember sonny. But i've long reassigned my self as wankosexual,and self-identified as a Toaster,and/or Tosster.

This is great!! Must hunt down his second..

I honestly was not expecting this to be so good. Kinda "witchy"--I bet Manson would have been a fan. I'm guessing you got this on Thurston Moore's recommendation, yeah?

I AM THURSTON MOORE YOU FOOLS!

Here's the version with bonus tracks, if you're interested...http://www.rockandrollarchives.net/2020/04/bobb-trimble-iron-curtain-innocence.html